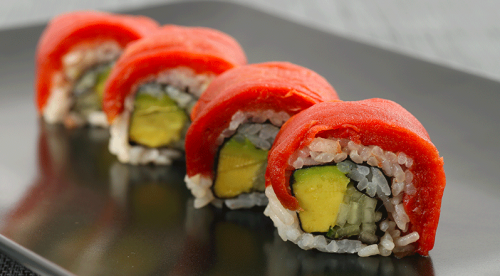 Plant-Based Sushi Made From Tomatoes

For those who are worried it’s a weird fish-like concoction from a mad scientist’s lab, rest assured, it’s not.

“This product is made with only 5 ingredients: tomatoes, non-gmo soy sauce, filtered water, sesame oil, and unrefined sugar. The texture is made through our proprietary mechanical process (not extrusion of isolated proteins), not through heavy processing or chemicals.” 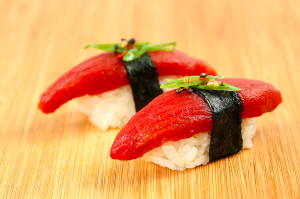 There’s no mercury or PCBs in the vegan tuna; toxins that are commonly found in fish. (There’s an entire chapter on why you shouldn’t eat fish – and the alternatives – in my book: The Vegan Way)

And according to Sassar, although the cruelty-free tuna is made from tomatoes, it’s “not tomato-y at all.”

“It’s a dead ringer for Ahi Tuna sashimi. It cuts into glistening slivers that are firm and juicy, and it’s got a savory bite. This flesh-like food is not fish. It’s made of tomato.”  – NPR

I just returned from speaking in Baltimore at Natural Products Expo East, side by side with Ocean Hugger’s CEO, David Benzaquen.  I couldn’t be happier for him, and all the beautiful fishes of the world.

There are so many new vegan foods on the horizon! New York and Los Angeles will be the first to see the new vegan sushi. And you can expect to find plant-based eel and salmon from Ocean Hugger next year, too.

Times they are a changin’! And they’re darn, tootin’ tasty, too!