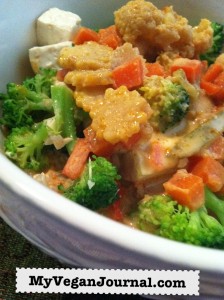 First of all, I am SUPER happy that the L.A. City Council just voted in favor of an ordinance that will make L.A. the largest city in America to ban pet stores from selling dogs, cats and rabbits obtained from commercial breeders!! That’s great news!! A homeless dog or cat is put to sleep in the U.S. every 8 seconds, so this ban will really help give a ray of new hope to those homeless animals! Hurray! 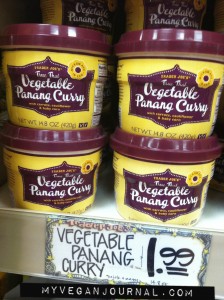 New Vegan Items at TJ’s! Seems like every time I go there, there’s something new I can eat! Last night I made a super quick & easy dinner… organic broccoli & organic tofu, served on a bed of organic brown rice, and then I smothered it with Trader Joe’s Thai Vegetable Panang Curry Sauce ~ which is a coconut cream base with carrots, cauliflower & baby corn. If you don’t have a TJs & aren’t in a rush, you could make your own curry sauce!

Just a heads up though – the TJ’s sauce is imported from Thailand, which means it’s not local – and traveled a very long distance… so it’s ok for a treat now and then, but just something to keep in mind if you’re trying to leave a small ecological footprint. 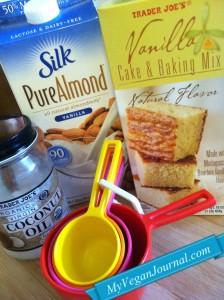 And this afternoon I made vanilla pumpkin cake! I used the TJ’s vanilla cake mix and added a about 3 heaping tablespoons organic pumpkin puree and a couple heaping tablespoons of flour to even it out! Ener-G Egg Replacer in lieu of the eggs, SILK almond milk in lieu of the dairy milk, and organic coconut oil instead of dairy butter! I also made a super quick little vegan vanilla yogurt pumpkin maple syrup topping, but I really think this cake would be BEST with my vegan whipped cream! And just a heads UP – I confirmed that the “enzymes” listed in the ingredients are plant based and not animal based, so it’s indeed a vegan cake mix! And they have a new cinnamon coffee cake mix too! Hurray! 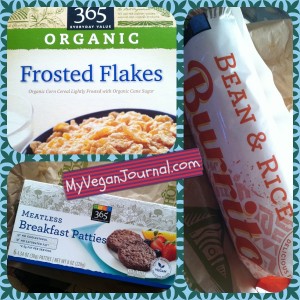 And today I found organic dinosaur kale for only $1.49 per BIG beautiful bunch at Ralph’s. It’s a SUPER food, packed with lots of vitamins, antioxidants and phytonutrients! It is NOT more expensive to eat healthy, so no excuses. 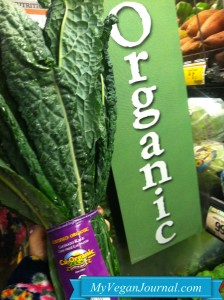 Just buy whatever healthy plant based foods are on sale in your local grocery store or farmers’ market!! you CAN do it! Gotta balance out that cake lol!

And lastly, don’t forget – please vote YES on CA Prop 37! We should have a right to know if there are fish genes in our tomatoes, ya know! If GMOs aren’t bad for us, they should be proud to label them… remember, it’s not a ban – we’re just asking for a right to know what’s in our food!

Have a beautiful, healthy day everyone!

← Happy 3rd Anniversary to ME and my Husband!
Happy World Vegan Day! →