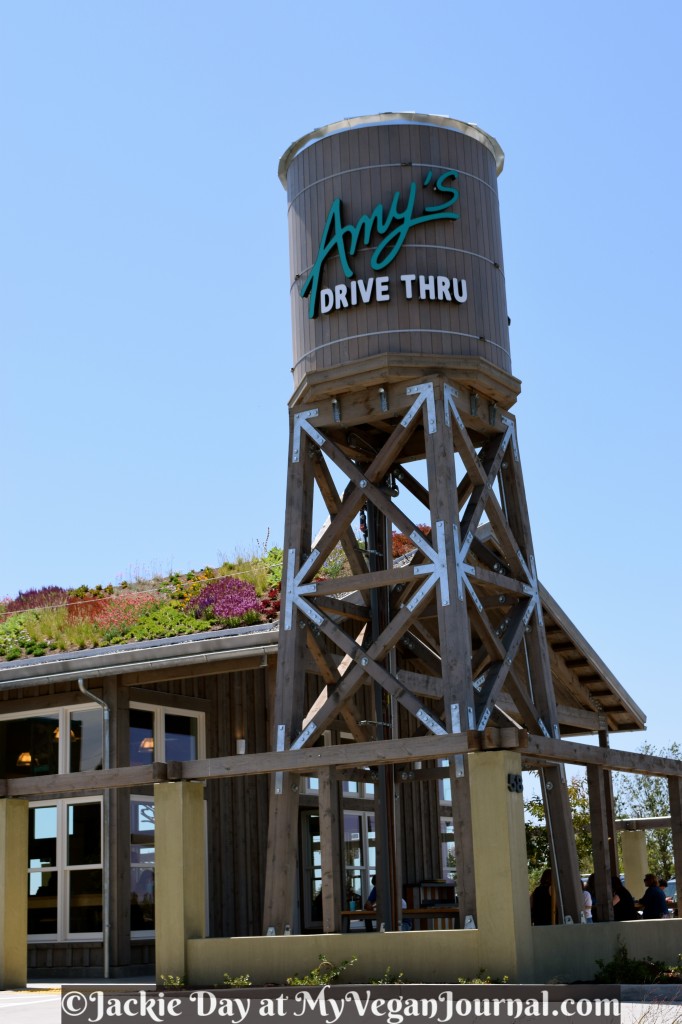 I drove past Amy’s Drive Thru in Rohnert Park, California, while it was being built, and felt like that person in the old Mervyn’s TV commercial where the girl is anxiously waiting for a big sale, and knocks on the store window begging, “open, open, open” over and over again.  I really was that excited about this! In fact, I repeatedly wrote to the publicist at Amy’s Kitchen asking when it would be open, and if they would please tell me the second it was, so I could zip up there.  Well, that moment arrived!!

It’s a few hours from me, but luckily I was leaving to head up to Northern California to visit The Stanford Inn in Mendocino (worthy of its own blog post soon! It’s AMAZING!) so we stopped by Amy’s Drive Thru on the way there, and on the way back!

It was everything, and more, that I was hoping it would be!!

On our stop en route to Mendocino, my husband and I ordered a couple of “The Amy’s,” a double veggie patty, with double vegan cheese, lettuce, tomato, onion, pickle and a secret sauce… along with vegan chili cheese fries, regular fries, organic lemonade, vegan mac & cheese, a vegan strawberry shake, a vegan vanilla shake and… an organic salad with lettuce, shredded carrots, shredded purple cabbage and cherry tomatoes.

As you can probably guess, we never got to the salad. Too full! lol 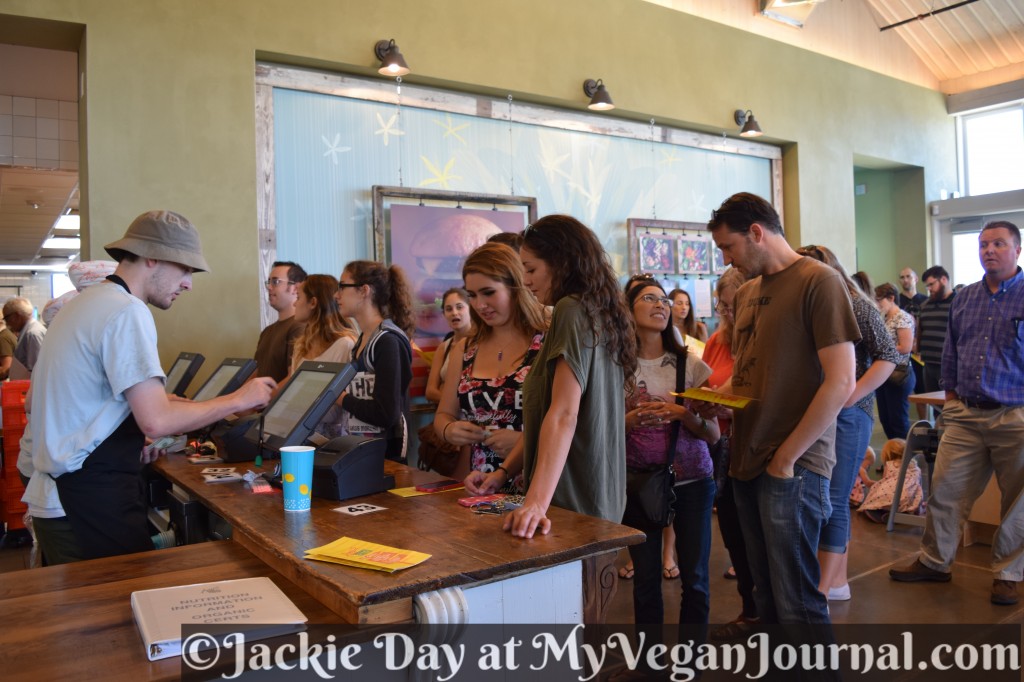 Everything was fantastic! And that organic lemonade? Have you seen Bridesmaids? Do you remember that scene where Annie is driving to the fancy Parisian-themed bridal shower and she’s handed a beautiful, tall glass of lemonade through her car window as she arrives? Yep, that’s first thing that popped into my mind! It’s crazy good!! Possibly the best lemonade I’ve ever had. As Annie would say, “So fresh!” 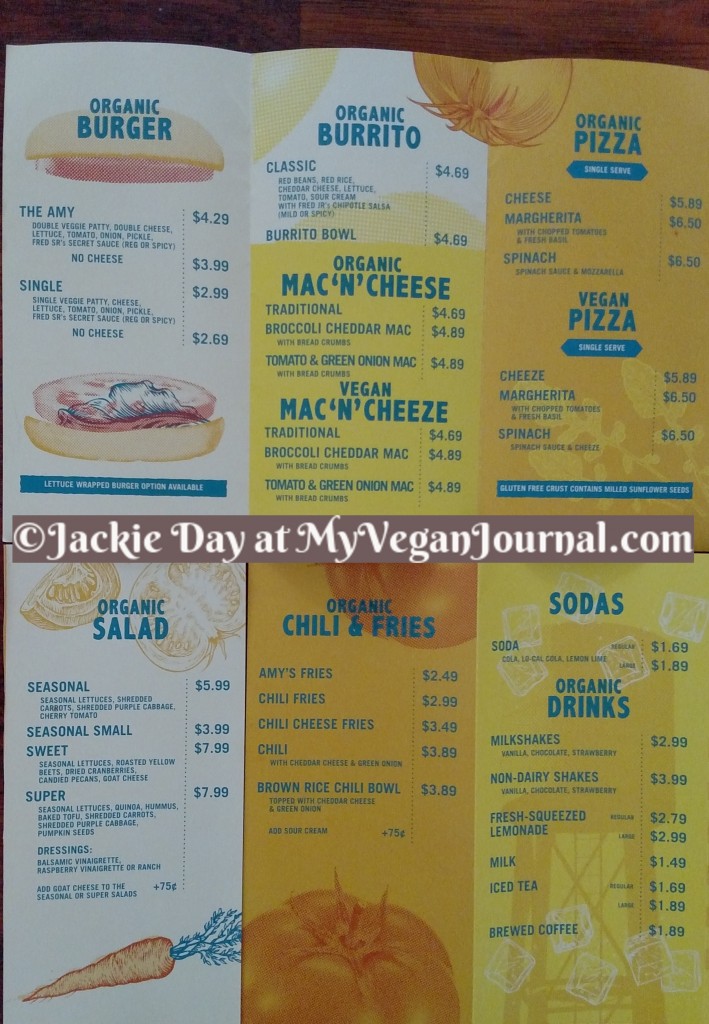 On the way back down, I was debating whether or not I wanted the vanilla or strawberry shake again – both were so yummy. I kept asking my husband, “Should I get the strawberry shake, or the vanilla shake?” over and over – I was that excited!! And of course, I did what any reasonable person would do… by the time we arrived, I decided to get both!

And you know what’s even better than getting both? Finding out when you get there that they’re completely SOLD OUT of those two non-dairy flavors because they’re THAT popular!!

I had a brief “woe is me” moment, and then I realized how incredibly fantastic this is for the animals, the environment and our health. Vegan options selling out is a great thing!

Yes, yes, I know.  The non-GMO organic salad that was leftover was surely the healthiest fare of the lot, but let’s be honest. Most folks aren’t going to go from the Standard American Diet (SAD) straight to eating a box of organic veggies.  And even after being vegan for over 27 years, I still enjoy a nice, affordable, grab and go meal now and then… and I especially love sweet treats. So here’s to changing the landscape of fast food! Hurray for a delicious fast food restaurant that can make everything on the vegetarian menu 100% vegan! They’ve got vegan pizza and burritos too; something for everyone!

Amy’s was packed! It had a two-hour long line on opening day, and when I asked how the vegan options were doing, a representative told me, “exceptionally well!”  Music to my ears! 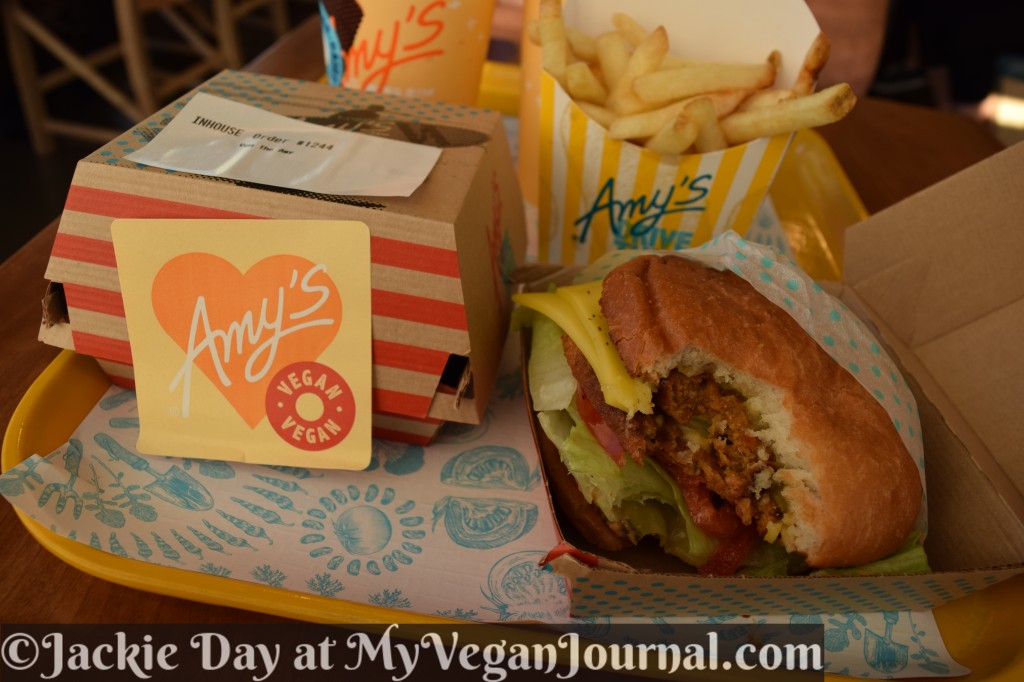 Did you know McDonald’s first-quarter profits for 2015 tumbled by nearly $400 million? Yep! They’re closing hundreds of restaurants too. People want better food. It’s that simple. Times they are a changin’! I sure hope Amy’s Drive Thru spreads across the country. At least one in every city, in each and every state. We are more than ready!