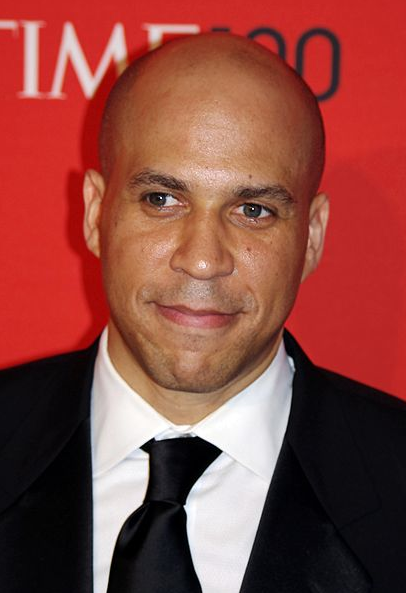 It’s true. U.S. Senator Cory Booker announced on his Twitter feed that he’s going vegan! When I read the news, I started screaming like a “tween” at a rock concert and began fist pumping like an overjoyed football fan, reveling in the excitement to the point of making my husband jealous. That’s how happy this makes me!

Only a few hours earlier in the U.S. Senate, the Keystone Pipeline bill failed by one vote. I mentioned on my Facebook page the irony of it all.  Our leaders, who exercised sound judgment to protect our environment, would likely go out to eat a steak or hamburger the same day. They know how to say “No” to destroying our world on the senate floor, but turn a blind eye to the environmental cost of eating meat and dairy products: our soil, water, ozone, and other limited resources – all grotesquely polluted and depleted by factory farms.

Not Senator Cory Booker.  He’s a breath of fresh, rejuvenating air in a time when the world’s sadness is almost crippling. He gives us hope.  And he doesn’t stop at helping others in the lofty political chambers; he votes with his fork, at each and every meal. He’s voting for the humane treatment of animals, for a clean environment, and good health for all. Booker “gets it” and he lives it. 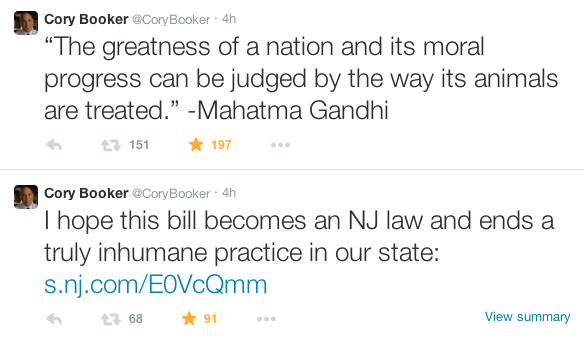 And this isn’t the first time he’s appeared as the “Un-caped Superhero” of all things good in the world.

He rescued a dog named “Cha Cha” from the sub-freezing cold after being alerted to the situation by a concerned citizen. While holding the dog, he seized the opportunity to give a helpful warning: “This dog is shaking really bad and you just can’t leave your dogs out here on a day like this and go away and expect them to be OK.” 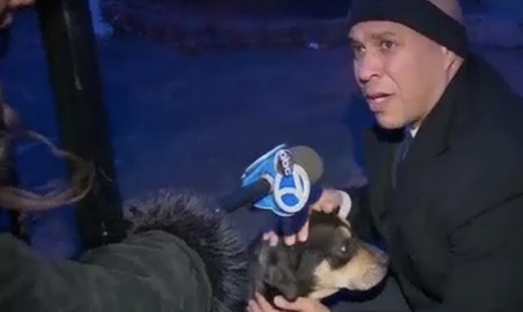 He also ran straight into a house on fire to bring his neighbor to safety with “nothing but flames” in front of him and “nothing but blackness” behind him.  And during the east coast “Snowmageddon” of 2010, Senator Booker grabbed a shovel and plow, and helped dig out the streets and sidewalks of Newark himself. And if that wasn’t enough for you, he gave away 81% of his income to charity last year. And no, that’s not a typo.

His twitter feed is filled with inspirational quotes as well as “calls to action,” such as urging New Jersey Governor Chris Christie to sign the ban on gestation crates.

Did you know that factory farm pigs live in metal crates – dripping with feces – in an area so small they can’t even turn around? Senator Booker does, and he doesn’t like it. Neither does the vast majority of voters in New Jersey. The ban passed both the house and senate, too.

Hopefully Governor Christie will take Booker’s advice and do the right thing. [If you’d like to leave a message for Governor Chris Christie, here’s his #: 1-609-292-6000.  I called and politely left a message for him to sign S998 – the ban on gestation crates.  His secretary was friendly and promised to pass my note along, and it took me less than 1 minute. [Update: The bad news? Governor Christie vetoed the bill. The good news? He will never become President of the United States. Ever.]

Well, off to the kitchen to make something yummy for my husband to eat. He’s 99.9% vegan (those 75% off post-halloween candy sales get him every time!).

I already accidentally blurted “If Cory Booker can go vegan, you can go vegan!” Whoops. I better bake something extra delicious tonight. [Happy Update: My husband is now vegan, too!!]

Have a happy and healthy day everyone! BE the change.

Jackie Day, vegan for 32+ years and author of the bestseller The Vegan Way: 21 Days to a Happier, Healthier Plant-Based Lifestyle That Will Transform Your Home, Your Diet, and You (St. Martin’s Press / Macmillan).