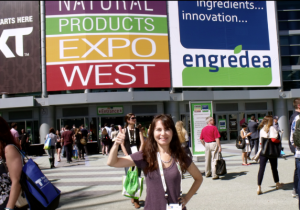 Last year en route to the Natural Products Expo West, my car broke down in the fast lane of a freeway in the middle of nowhere. I had to get a tow truck to take me to a repair shop over an hour away, find a rental a car, and after much stress (and money), finally made it to Expo West.  This year? No problems! HURRAY!

And without further adieu…

Bacon? Why would a vegan be happy about bacon?! Well, this little vegan is happy that there’s a brand new super yummy chip that’s bacon “flavored” without having any bacon in it! Just plants! This should make both the bacon lovers and the beautiful, loving, pigs of the world very happy. How did they do it? With a nice mix of natural smoke flavor and spices. They’re non-GMO and organic too! Move over Doritos! Check out their Jalapeno Lime Tortilla Chips too. SO good. 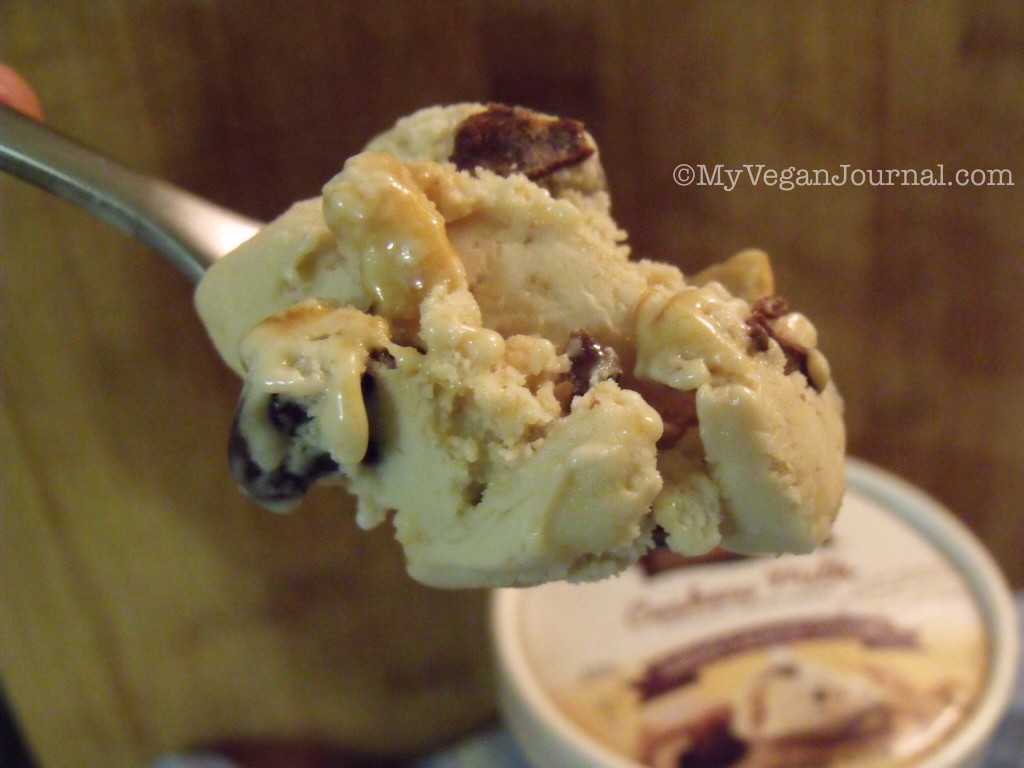 This was by far my favorite sweet treat of the entire expo! It has a perfect, creamy balance of sweet and savory thanks to a little sea salt. In fact, the second I started writing about it just now, I had to dash to the freezer and bring some back to eat at my desk. It’s GMO free too! Stay tuned for a full review of all of their new cashew milk flavors! 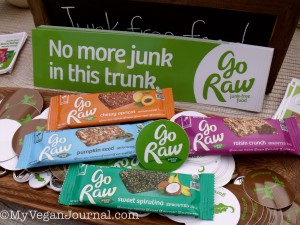 Go Raw completely re-vamped its packaging and I like it! Love their products too. With the exception of their chocolate, all of their products are made from sprouted seeds which are usually mixed with organic fruit and gently hydrated into little chips or bars. Because they hydrate everything at such a low temperature, the sprouted seeds are still “alive” when you eat them. They say if you plant one of their snack bars in the ground, it will grow! That’s cool! And healthy. 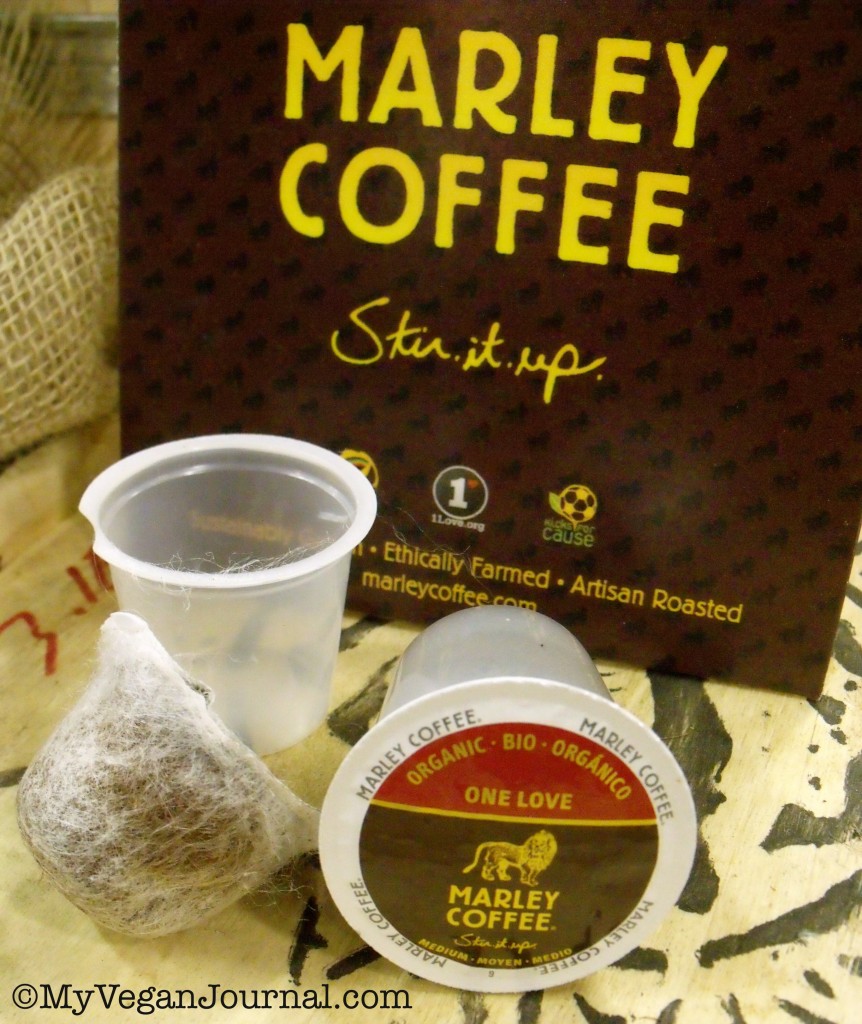 I stop by Marley Coffee’s booth every morning when I go to Expo West and this year was no exception. Rohan Marley was his usual friendly self, and the coffee was absolutely perfect! My favorite is their organic One Love blend.

What really caught my eye this year though was the introduction of the new Ecocup—coming late summer 2015. Over 10 billion single-serve capsules are consumed and go into landfills annually in North America alone, so this thoughtful company decided to do their part to help the world by creating one that’s recyclable. And the little bag inside can go straight into your compost. That’s coffee with a conscience for ya. I love it!

5. Meeting the Natural Products Expo West “We Blog” Team and other Friendly Folks 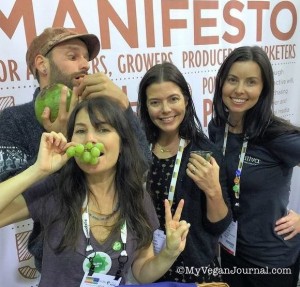 This year I was selected to be a part of a team of bloggers who covered the Expo for the Expo and it was really fun! I enjoyed meeting the other writers, all of whom have different perspectives on what qualifies as “healthy” when it comes to food and products.  Some sought out gluten-free food, while others leaned towards raw foods or products which create the least amount of harm to the environment. Everyone was so passionate about good food and writing.  Just wonderful! 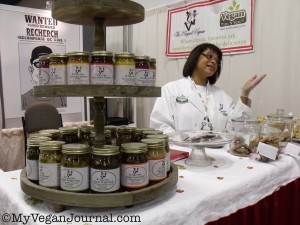 I also really enjoyed chatting with the folks at The Elegant Vegan booth.  This team of husband, wife and family members couldn’t be any sweeter.  They gave up successful careers on the east coast, moved to Elkhorn, Wisconsin, and opened up a little bed and breakfast.  The guests enjoyed their food so much, that they decided to take their healthy delicacies to market.

The Elegant Vegan makes everything from Piquant Pickled Kale to Vegan Pulled Porkless. All of their food is made with great care, and love. And it is SO good! If there was a “Most Friendly Natural Products Expo West Booth” Award, The Elegant Vegan would get it, hands down. 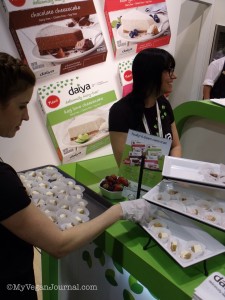 Nailed it. How on earth can someone make a delicious, creamy cheesecake without using any cheese? Well, Daiya managed to take a unique blend of potato starch, pea protein and coconut oil (doesn’t sound very good when I write it like that though, does it? lol) and mix it with a few other ingredients from plants, and voilà! Cheezecake! 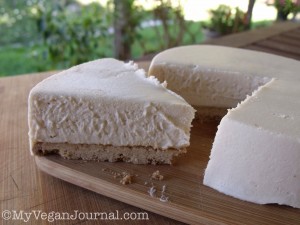 It comes in Strawberry, Key Lime and Chocolate too, but the New York Style was by far my favorite. It was SO good! It’s not a super healthy dessert, but perfect for those trying to kick the coagulated boob juice habit, or for vegans who want to indulge in an occasional sweet treat. The dairy cows of the world are happy Daiya’s Cheezecake exists, and I am too! 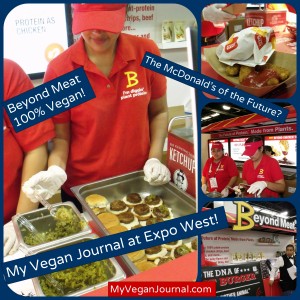 7.  Beyond Meat’s Plant Based McDonald’s Booth

Last year Beyond Meat’s Booth looked like Taco Bell.  This year, McDonald’s was the theme! They served their “Beastly Sliders” (more protein and iron than beef & more omega’s than salmon!) with a side of breaded vegan chicken strips – assembly-line fashion, just like you’d see at a fast food restaurant. Eating a healthy, whole food, plant based diet is best, no doubt, but for those in a hurry – or seeking refuge from a Big Mac attack – Beyond Meat is awesome!

Every year representatives from the media get a press bag filled with goodies. They’re not all vegan (phooey!) but most of the treats are, and there’s always a few super cool ones! This year the bag included Crazy Richard’s Pure PB which is simply just a jar of non-gmo peanut protein powder.  I really like it because it’s easy to add to smoothies without dealing with all of the peanut butter that usually gets stuck to the spoon and blender.

I also got an invite to go make vegan, soy based candles at a candle factory – and I took them up on the offer. Arts and craftsy stuff??! I’m there! Got to pick out my favorite wax colors and the essential oils too.  So much FUN! And the press room had all you could eat samples of Field Roast’s vegan Chao Cheese, Follow Your Heart’s Vegan Provolone Cheese and a yummy gac fruit drink by Total Happiness (TH Naturals). Yum! 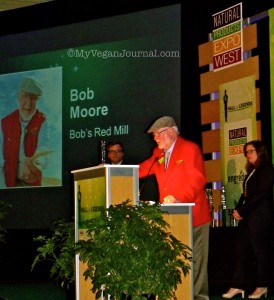 9. Bob Moore of Bob’s Red Mill Inducted into the Hall of Legends

Each year Natural Products Expo West celebrates and honors the individuals who have made significant contributions to the natural products industry. This year one of those celebrated was Bob Moore. When Bob first brought his products to Expo West, he had no broker, no distributer – not even a price sheet, but he credits the Expo for connecting him to a distributer and helping launch his successful business into the mainstream.  Today, Bob’s Red Mill is distributed in 81 countries! Bob Moore was gracious and grateful:

I want to leave the world a better place.  I have led the most amazing life anyone could ever live. I have no complaints. I am truly blessed. ~ Bob Moore 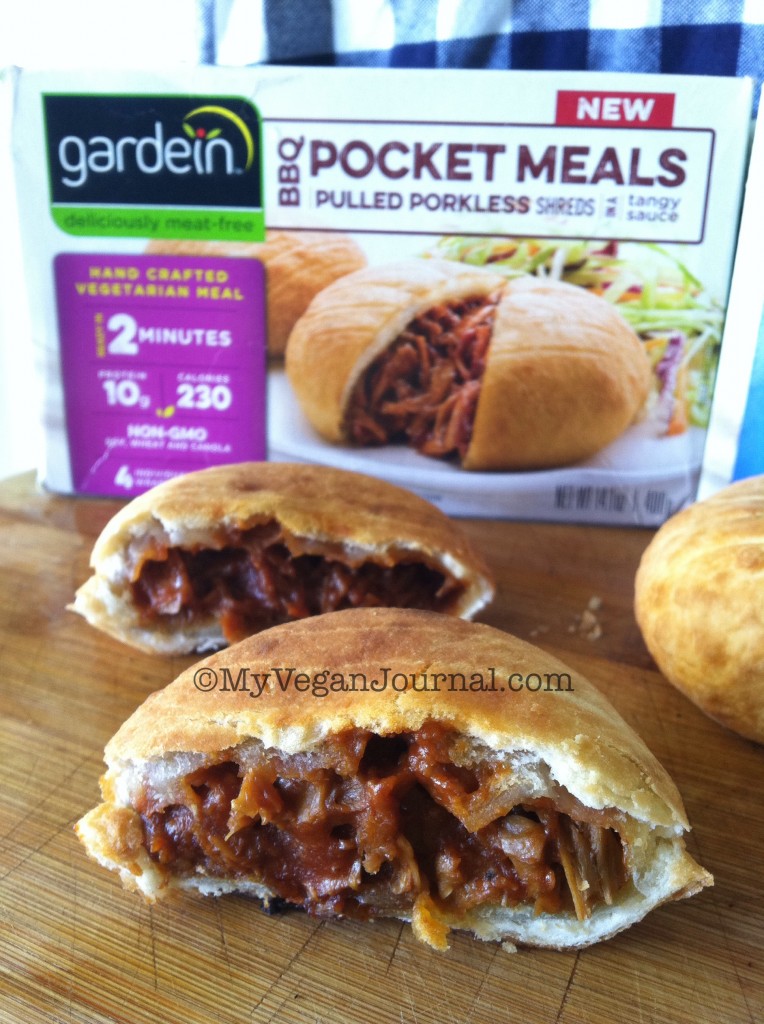 Just when I think I’ve seen it all! Last year Gardein debuted their fishless filets, this year their pulled porkless pockets, porkless bites and vegan crabless cakes were all the rage (wow, that’s a mouthful!). Stay tuned for a full review of these treats. I didn’t get a chance to try them at the Expo (thousands of booths, so little time!), so Gardein, thankfully, sent samples to me in the mail. The vegan pulled porkless pockets were fantastic – the filling is smothered in a yummy BBQ sauce, and I’m about to try the vegan crabless cakes. Just goes to show, anything you can make, someone can make vegan!

And that’s the vegan scoop on Natural Products Expo West 2015! As always, try to enjoy a healthy, whole foods, plant based diet that’s fresh and colorful… but just know, if you need something super fast, easy and tasty – it’s out there! There’s a huge, ever-increasing demand for vegan food right now – and manufacturers are responding faster than ever before. It’s profitable, delicious, and makes the world a better place – one bite at a time.