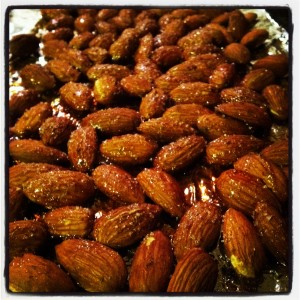 I was at a work event a few months ago, and as the day was ending, the “chef” started to throw out all of the extra food… including several big bags of unopened raw almonds! Why would anyone throw out bags of perfectly good almonds?! Lucky for me, I grabbed them before they hit the garbage bag, and they’ve been sitting in my cupboard ever since… until now!

Since I don’t have a Vitamix to make Almond Milk, I thought the next best thing would be to toast em’! First, I spread them out evenly on some foil. Then to keep things economical, I drizzled them with Log Cabin Syrup, which is primarily made from rice syrup (it was 1/4th the price of pure maple syrup). It also has “natural flavors” in it though, so I wrote to the manufacturer and asked if it was vegan and received the following response: “There are no animal ingredients in Log Cabin syrups.” Hurray! Pure maple syrup is a bit more pricey, but if you have it handy, I’m sure it would taste equally yummy! 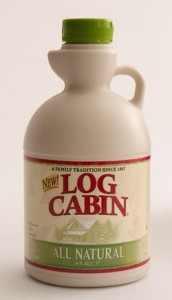 Next, I sprinkled a pinch of nutmeg & cinnamon over the almonds, just for a hint of festive coziness! Tis the season! Then I just set the oven to broil and popped them in for about 20 minutes, and voila! A super healthy study snack that’s 100% vegan, easy to make and good for you! 1/2 cup of almonds has 10 grams of protein! Yowza! They’re also a good source for calcium and iron too! 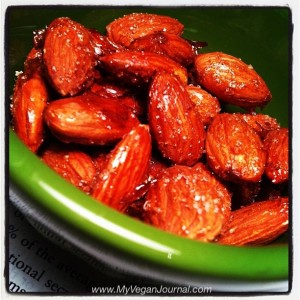 Some people offer sugared almonds wrapped in tulle as a wedding favor… a tradition that dates back to early European history. These almond “bonbonieres” symbolized children, happiness, romance, good health and fortune! Hurray for sweet almonds! They also made our home smell super yummy!

*just a heads UP —> check your almonds periodically while cooking so they don’t burn, as some ovens vary in temperature.

← On the 8th Day of December, I wrote about 8 Vegan things and a Partridge in a Pear Tree!
How to “Veganize” a One Dollar Box of Chocolate Chip Cookie Mix! →