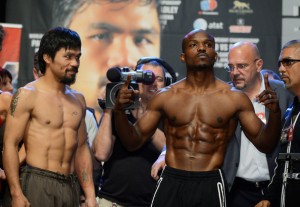 Well, the message is clear. If you want to gain strength for a competition, stop eating all of those dead carcasses. That’s what the champs do! They ditch animal products!

Yep, that’s right! Bradley went VEGAN to train for the WBO welterweight battle & told ESPN that it gave him “a lot of fuel to train hard. Recovery’s a lot quicker, digestion’s a lot quicker…I’m able to use energy a lot faster than if I was consuming animal protein. I feel great.”

And it’s all that “great” energy he gained from eating 100% plant based foods during training that just helped Bradley clinch the world championship in Las Vegas tonight, defeating WBO welterweight champion Manny Pacquiao! 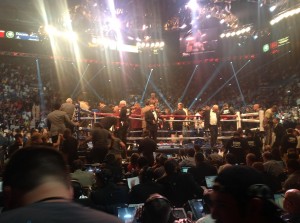 Bradley’s vegan diet includes making a fruit smoothie for himself and his daughter every morning too! So adorable! “Dude, I swear, it’s the most unbelievable feeling ever!” Bradley said regarding his vegan diet. “The reason I love it so much is that I feel connected to the world. My thoughts are clearer, crisp. I am sharp. Everything is working perfectly – I feel clean.” said Bradley.

And it looks like he wasn’t kidding! He just proved it tonight! Hurray Timothy Bradley!! The New WBO Welterweight Champ of the World!!