This made me really happy today & if you’re avoiding GMOs & pesticides it might make you happy too! 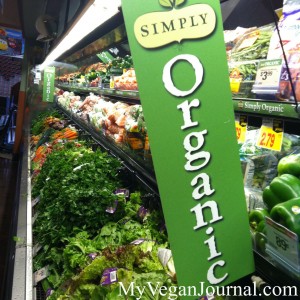 I thought to post a few pictures from my trip to the grocery store today. Nope, it’s not Whole Foods Market, Trader Joe’s or Sprouts! It’s Ralph’s!! A subsidiary of Kroger’s!

Why is this so awesome? Check out ALL of the organic fruits and vegetables!! That’s an entire long row of them! I remember not too long ago there weren’t ANY fresh organic fruits and veggies in mainstream markets… and just recently there were only a handful of them to choose from, and most were wilted looking, as though they had been sitting there for ages with no one to buy them. 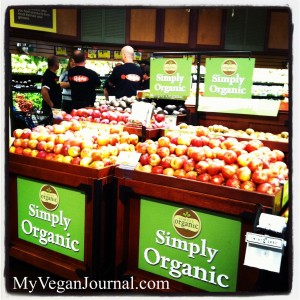 Why is this SO important? It means there’s a huge paradigm shift in eating habits unfolding right before our eyes! Sure, we’ve been able to buy fresh organic produce at farmer’s markets and local health food stores for decades now, but they’re now hitting mainstream stores in a BIG way! This is surely a reflection of consumer demand, and with that will come increased revenue for the organic produce growers, some healthy competition and hopefully a deflation in price making it much easier for the average consumer to buy them!

Makes me SO very happy!! 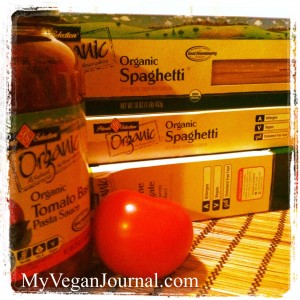 And check out the labeling on their canned and dry organic products. They’re clearly marked with a “V” for vegan! Why is that important? It affirms that there are actually lots of vegans out here and that people finally know what the word vegan means. It wasn’t all that long ago that I had to explain to my doctor why I was requesting a B12 blood test. Me: “I’m vegan, you know… it means I don’t eat any animal products, so you need to check my B12 now and then.” Doctor: “Vegan?” 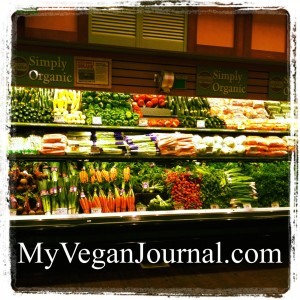 Isn’t that weird? I can’t believe people didn’t even know what it meant… but they didn’t! I only knew of one other vegan when I decided to stop eating animal products, and she was just a random girl I met that didn’t even live in this country! Alas, no more! I know a bazillion vegans now!

Vegan! Organic! It’s here, it’s there, it’s everywhere!! A simple trip to the grocery store today gave me a little ray of hope for this brutal world… let’s keep this organic vegan train a movin’…. chugachuga chugachuga Choo Chooooo! All Aboard!!!