There are 457 Trader Joe’s locations packed with a huge assortment of vegan food, and I’m hoping there’s one near you! TJ’s is truly a vegan treasure trove!

Check out the new vegan food items TJ’s has on hand: 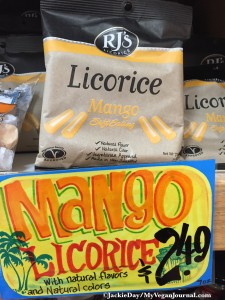 What’s extra cool about this Trader Joe’s licorice is that it doesn’t contain palm oil! If you don’t like mangoes (my husband can’t stand them) or you don’t have a TJ’s near you, check out Panda “All Natural” Licorice – it’s vegan, super yummy and comes in several flavors. 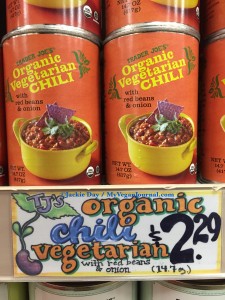 The label says “Trader Joe’s Organic Vegetarian Chili,” but it’s actually vegan! You may have seen it at TJ’s under a different label; vegan chili at TJ’s isn’t new – however, this formula is! The previous chili was made by Amy’s (ssshhh… top secret! you didn’t hear it from me!) but now TJ’s is making its own.  I liked the previous version, and this one is yummy, too.  Great for when you’re short on time in the kitchen! 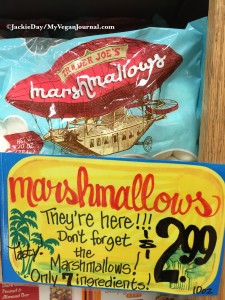 Most marshmallows contain gelatin, aka: boiled hooves, bones and tendons.  Why anyone would want those bits and pieces floating on top of their hot cocoa or melted in s’mores is beyond me.  Well, now vegan marshmallows are available at Trader Joe’s, and they’re darn tootin’ good.  Just keep them away from me! 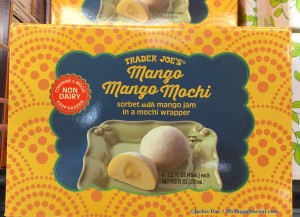 Mochi is a soft and delicious Japanese rice cake and in this frozen treat, Trader Joe’s has stuffed it with sorbet and mango jam. No animal products here, thank goodness! 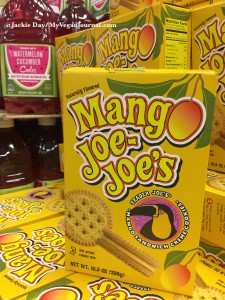 You can probably guess by now; there’s a mango theme going on at Trader Joe’s right now, and they’ve included their infamous Joe Joe’s in the mix. If you like oreos and mangos, you’ll likely enjoy these too.  Just don’t eat too many sweets, my sweet! 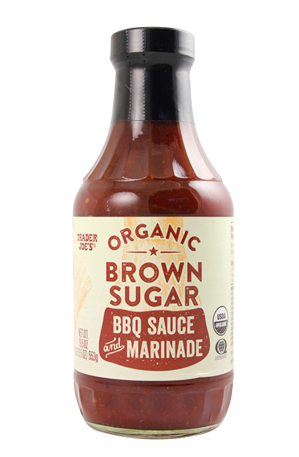 This tasty vegan condiment made its debut a little earlier in the year, but now that summer is here, it’s a perfect addition for those outdoor BBQs! Grill up a tasty portobello mushroom, or one of Trader Joe’s vegan Thai Sweet Chili Burgers and you’ll be good to go! Or more likely, sit and relax. 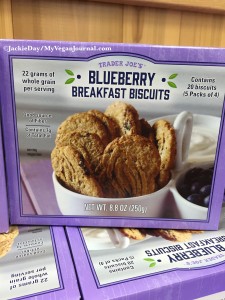 These vegan biscuits are really good! They’re from France, and the supplier has been in business since the late 19th century. Perfect for dunking in hot tea, or cramming in your backpack when you’ve got to dash out the door.

I love whole grains, but for those who need to avoid them, this new rotini pasta is made with 100% black beans! And for the one person out there who is still worried you won’t get enough protein on a plant-based diet (lol!), there’s 14 grams of protein in every serving, and 15 grams of fiber too! 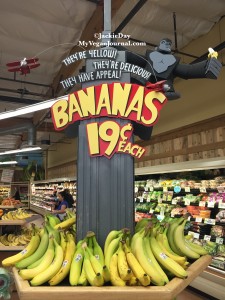 And last, but not least, Trader Joe’s has BANANAS! They’re not new, but at only 19 cents per banana, and action packed with nutrients, I thought they were worth mentioning.

I love bananas! I eat them whole and toss them into smoothies… and if you want a fun summertime treat, check out my 3 ingredient frozen banana bites recipe! It’s been “pinned” over 25,000 times on Pinterest!

Happy Vegan Summertime! And cruelty-free hats off to Trader Joe’s for offering so many vegan options! It’s SO easy to be vegan!