The Dirt on Vegan Gardening

It’s been quite a while since I’ve had enough space to have a vegetable garden.  For the past several years, I’ve made do with potted plants on balconies and narrow porches, but alas, we recently moved and I finally have some space… and I thought to share with you a few things that came to mind as I was enjoying my day in the sun.

Although it was fun to ogle the many beautiful and intricate garden beds in magazines and on pinterest, in the end, my husband made a simple, traditional, rectangular shaped bed from four pieces of wood and a wire mesh base.  And it’s the seemingly benign metal mesh that first gave me pause.

All I could think about was some poor baby gopher longing to eat the tasty roots of my vegetables and in doing so, getting his cute little head stuck in the mesh under the bed.  I imagined him dying a slow and painful death… all because of me. Yep, the mind of a vegan… always wandering down that road.  No raised garden bed was worth that horror.  Thankfully, my husband found mesh with openings that were super tiny… no chance of furry little animals getting trapped – and no nightmares for me. The gophers are still welcome to nibble on my veggies; they’ll just have eat them from atop, safe and sound. 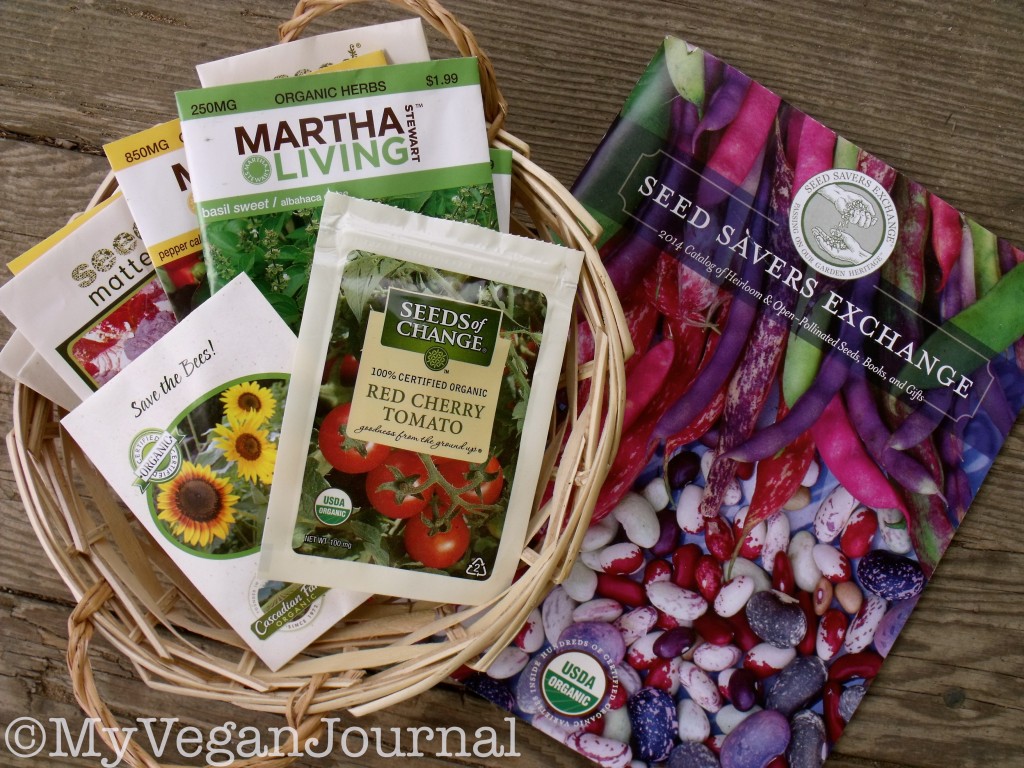 It’s not easy restricting myself to a few brief sentences on this topic considering the devastating impact of toxic farming methods and GMOs, but suffice it to say, if you don’t have to support Monsanto and other large biotech corporations, don’t.  Monsanto developed and sold saccharin to Coca Cola, agent orange to the military, and now they’re in the seed business – in a very big and UGLY way.  If you’re looking for a documentary which reveals their dark history, check out Food Inc. or The World According to Monsanto.

Thankfully, organic seeds contain no GMOs, synthetic pesticides, herbicides or chemical fertilizers and they’re pretty easy to find. I found a nice variety of organic seeds at Home Depot – buy 1 get 1 free – bringing the price down to 99¢ a pack. I also ordered a beautiful organic seed catalog for free which just arrived in the mail today.  Excited to flip through it tonight! 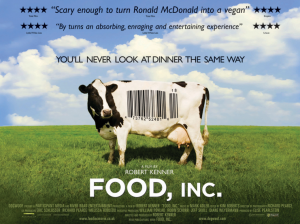 The Soil: Read the Label

My husband built the raised garden bed, we filled it up with dirt, and then suddenly the stench set in – and it was overwhelming.  I had specifically avoided buying all of the “miracle grow” type soils because I didn’t want a chemically induced, man-made, bio-engineered garden miracle; I wanted a natural one and bought what seemed like the most benign looking soil of the lot.  Little did I know, it was filled with factory farmed chicken parts, poop and other random things that I didn’t want absorbed into our food.  It didn’t even dawn on me to read the label on a bag of soil.  I was devastated.

And so we began the task of digging out all of the dirt from the garden bed (so thankful for an understanding husband!), and went back to Home Depot in search of vegan soil.  I approached an older, gray haired gentleman and asked if  he had any soil without animal products.  He asked “Why don’t you want animal products?” And I thought to myself, here it goes… he’s not going to understand me at all, but I guess I’ll take this opportunity to educate him.  I said, “I’m vegan and I don’t want my vegetables to absorb dead animals.” To which he shockingly replied, “You’re a very smart girl!”  His face filled with an unexpected joy, as did mine. 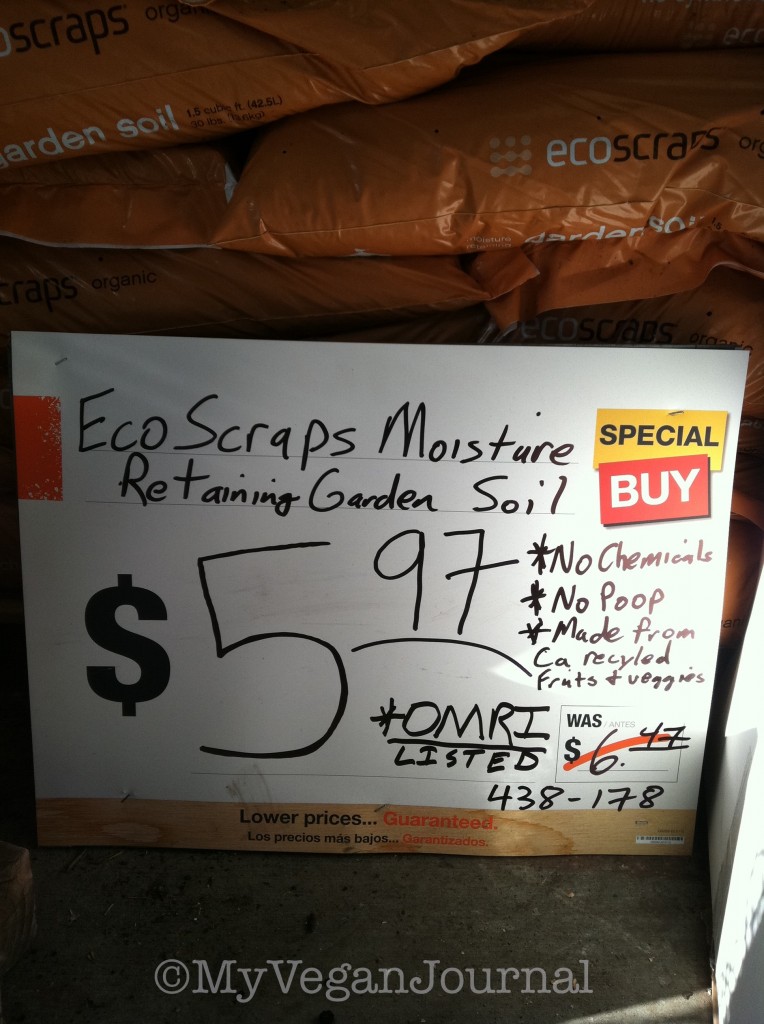 He introduced himself as Ron, shook my hand, and spent the next 20 minutes telling me all about his travels in search of wooden barrels.  Along the way, he met several ranchers, to each of which he posed the question, “How do you pick the best steak?” Each rancher confided that because of the rampant use of antibiotics and hormones, and other health issues, they no longer ate meat and that he should do the same.

Ron told me he wasn’t a vegetarian quiet yet, but he was on his way to becoming one, and that he had the perfect soil for my garden! One which he uses – without any antibiotics and hormones – and no dead animals.  Turns out Ron didn’t need me to “educate” him after all.

Ron led us over to a big pile of orange bags which were filled with soil made from leftover fruit and vegetables! He said he spoke to the distributer and confirmed that the soil is simply made from produce that stores would normally throw away, but instead of letting it fill up the landfills, Ecoscraps collects the produce and turns it into gardening soil.  The company has recycled 60 million pounds of food waste to date. Amazing! 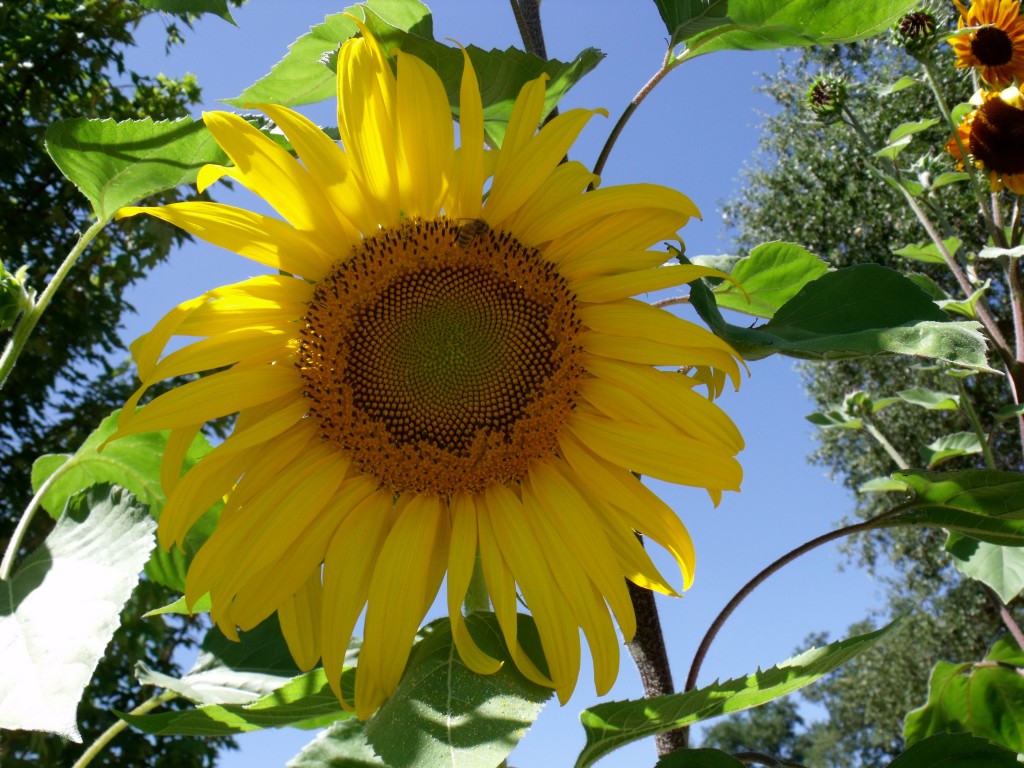 I’ve been told by some that it’s “no big deal” to use byproducts of the factory farming industry and that it’s wasteful to not use the remains of those already dead.  I wonder if those same people would buy the human hair carpets made from holocaust victims during WW2.  Industrious? Perhaps.  But there’s no way in hell I’d ever give one penny to such a horrific event in our history – an experience that isn’t far from what many animals go through each and every day.

And there you have it. A few simple tips on how to make your garden as compassionate as can bee. Bzzzzz….

UPDATE (4/22/19): I’m currently using an E.B. Stone compost that’s only made with “organic green waste.”  As always, read the ingredients before you buy any soil, as ingredients can always change.

“When the world wearies and society fails to satisfy, there is always the garden.” ~ Minnie Aumonier