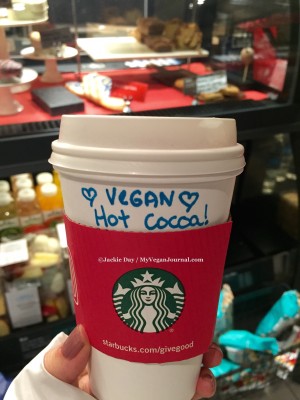 As I’ve said before, I have the biggest sweet tooth of any vegan I know, so whenever I hear there’s a new vegan treat out there, I’m thrilled!

Starbucks just debuted their new Toffee Almond Milk Hot Cocoa, and if you leave off the whipped cream, it’s 100% vegan!

And here’s another treat for us vegans: you don’t have to pay extra for the non-dairy milk!  Since the beverage is already made with almond milk, there’s no extra 60 cents charge.  Sweet!

It goes without saying, but, all that sugar isn’t very healthy.  I know that; you know that; we ALL know that.  However, if you’re going to enjoy a cup of hot cocoa this holiday season, it’s nice to know this one is low in fat, and has ZERO cholesterol.

It also doesn’t harm the animals.

Dairy farmers have no use for most baby male calves –  after all, they can’t give milk – so within 24 to 48 hours of birth, most are torn away from their mothers and sold off to the veal industry. Once confined to small closed crates, they can’t move so they won’t develop muscles.

They live in the dark, and are fed a liquid diet too, all of which keeps their flesh pale pink and soft, just the way those who eat veal want it.

So, be good to yourself, the environment and the animals, too.

If you want a cup of hot cocoa while you’re out and about, try Starbucks’ new Toffee Almond Milk Hot Cocoa (and hold the whip!).

Tis’ the season to be merry, and kind. Peace and compassion for ALL.