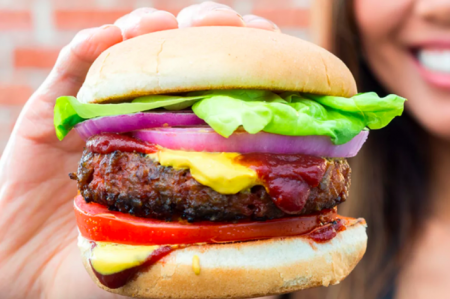 Thanks to consumer demand, Beyond Meat’s vegan “Beyond Burgers” will now be served at ALL TGI Fridays United States locations.

WOW.  That’s 469 restaurants, scattered across the country, where hungry folks will now be able to pull over for a tasty, hearty, satisfying, and convenient vegan meal!

A meal that’s better for our health, the animals and the environment, too!

TGIF tested The Beyond Burger at a handful of locations this past October, and it was SO successful, that it became the fastest test-to-table menu offering in the vegan brand’s history.

You’ll see the new burger on the menu listed as the “Beyond Meat Burger” – which is served with a non-vegan bun and dairy cheese, so if you want to make your entrée vegan, just ask for it to be served alone or “Green Style” on crispy green lettuce leaves, without cheese and without FridaysTM sauce, for a vegan-friendly option. And according to TGI Fridays Social Media, the “Challah Bun” is vegan, too!

Did I mention times they are a changin’?

← If Fish In Your Champagne Sounds Gross, Try These Vegan Bubblies Instead!
Public Health Warning: Avoid ALL Romaine, Likely Coated With Feces →