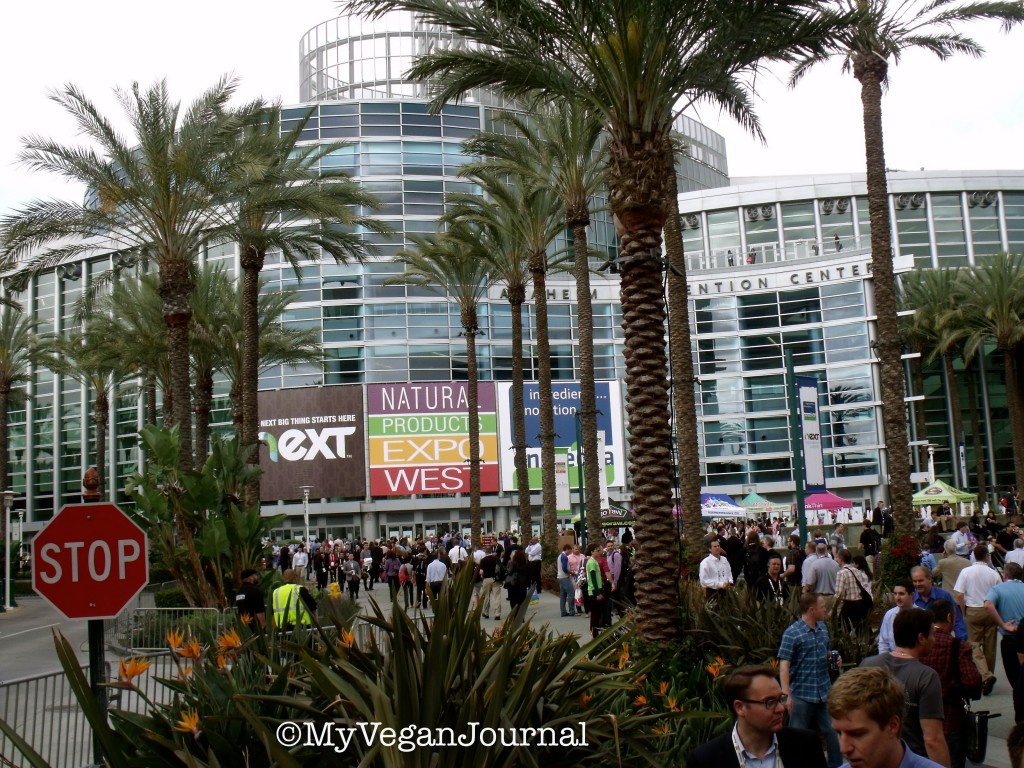 My car came to a halt in the fast lane on the highway in the middle of nowhere when the fuel pump broke (scary!!), but between a tow truck, a rental car, and a mechanic, I made it to Natural Products Expo West 2014. Whew!! And as always, it was well worth it!

I’ve been going to Expo West for quite a while now.  I originally attended to document healthy snacks and beverages for public schools, but I’ve since expanded my mission to include the search for new and yummy vegan treats! And let me tell ya, there’s plenty of them! In the past 10 years, consumer demand, and market response, has been AMAZING. 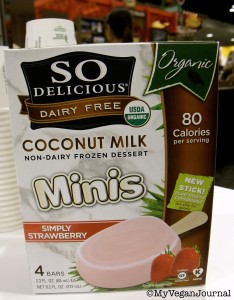 It’s really hard to narrow my favorite vegan “moments” down to just 10, but here it goes… in no particular order! Love them all!

I love the Coconut Milk Mini Strawberry Ice Cream Bars! These vegan ice cream treats are incredible! And the new popcycle sticks aren’t wooden anymore… they’re made from a biodegradable plant starch which is good for the environment AND for your taste buds. I really enjoyed visiting this booth – lots of delicious samples! They made me a super yummy latte in a cute handmade mug too! Here’s their coupon page if you want to save a bit! So Delicious Coupons! 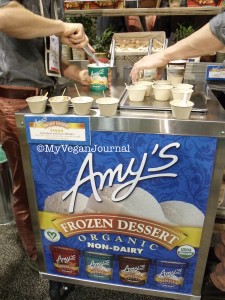 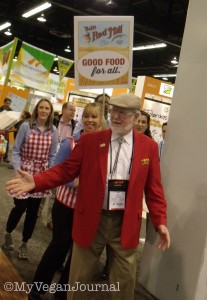 I was just bopping along in the massive convention center, sampling all sorts of goodies when I heard live big brass band music, turned around and there he was! Bob smiling and waving to everyone! SO cute! He was surrounded by an entourage of happy co-workers and musicians, and shook my hand! I’ve loved his products for a long time.  I currently have Bob’s Red Mill Flax Seeds, Chia Seeds, 7 Grain Pancake & Waffle Mix, Vegi Soup Mix and 13 Bean Soup Mix in my pantry right now! If you’re trying to find these products at a good price, check out Big Lots – sometimes I find them there for less than at the grocery store! 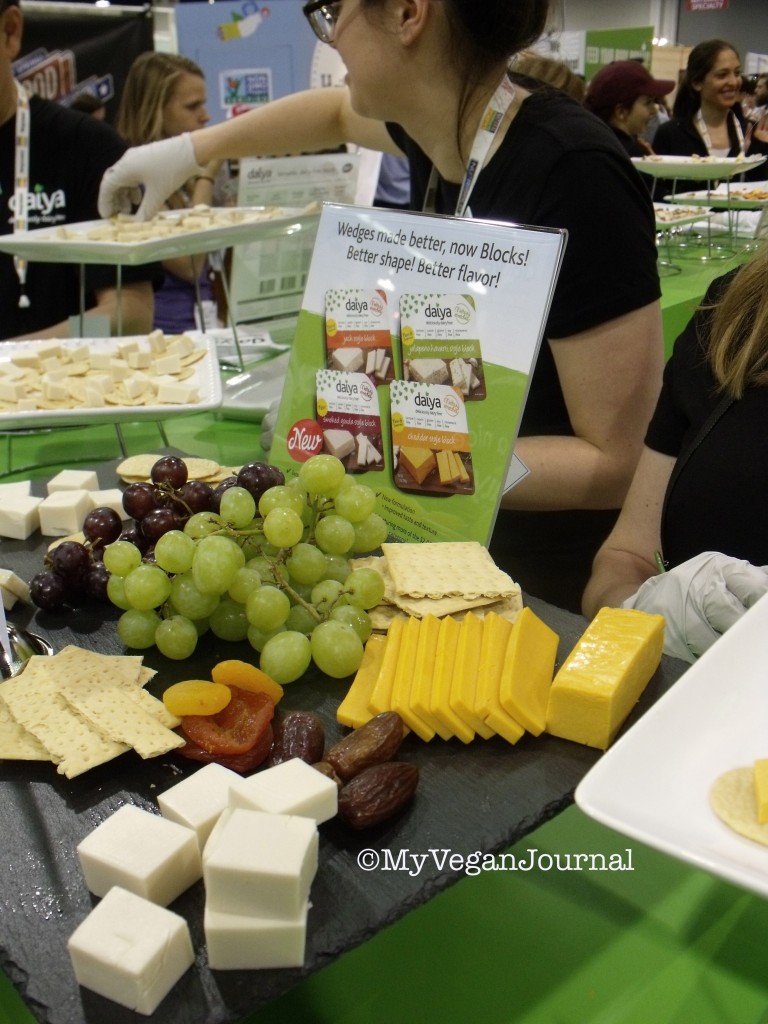 I’m not a huge fan of vegan cheese substitutes, but I do think they can be helpful for those in transition to a plant based diet. I took a class on how to make vegan cheese from different nuts, and the nut cheeses were delicious! I also like using nutritional yeast to make creamy cheesy pasta sauces!

The reason Daiya Vegan Blocks made the “Top 10” List is because they don’t contain palm oil! This is HUGE considering when I went last year and asked an exec if they could please remove palm oil from their wedges they replied that it was impossible to get the consistency they wanted without it. Well, I guess enough people complained… because THIS year, the palm oil is GONE and the orangutans are happy about that! If you don’t know about the painful link between palm oil and orangutans, you should google it. Instant tears, for me at least.  Just horrible.

And I wasn’t the only one who was happy about the new Daiya Blocks; Daiya’s new Smoked Gouda Style Block won VegWorld Magazine’s 2014 Best in Show award for Best New Vegan Product! 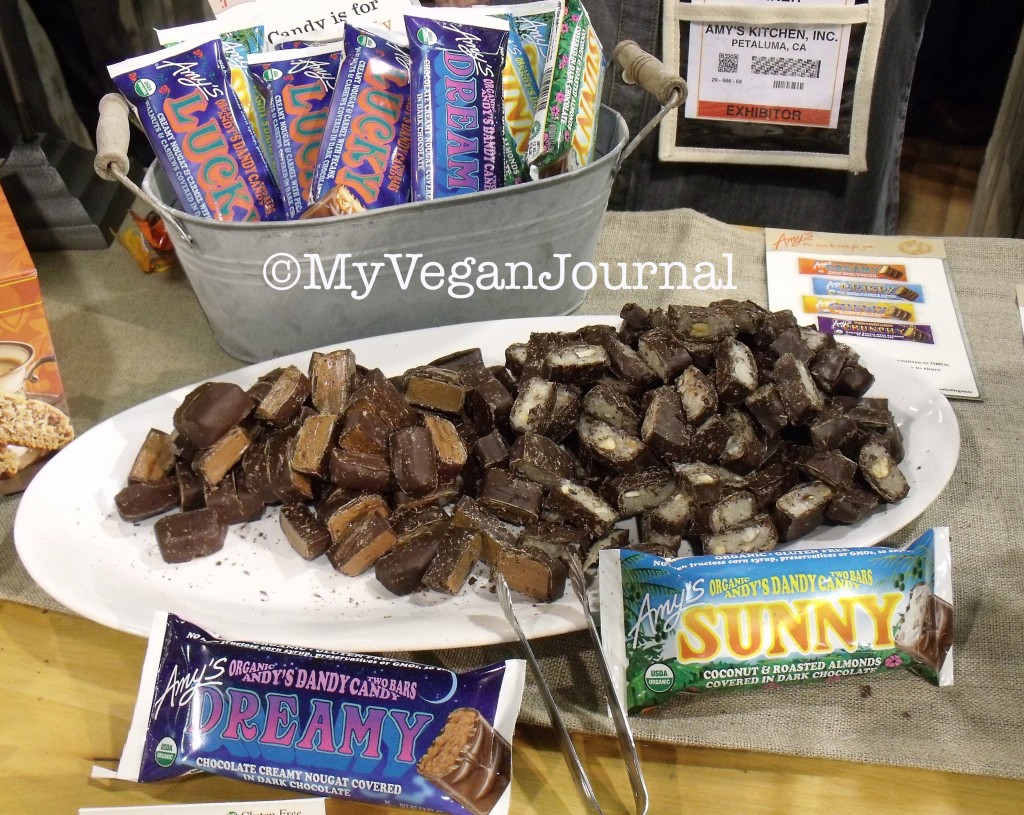 I went to Amy’s booth twice! Vegan candy bars? I’m IN for seconds! I can’t tell you how yummy these were, especially if you have a vegan sweet tooth like me! Two of the brand new flavors: Sunny (coconut and roasted almonds!) and Dreamy (chocolate creamy nougat!), are vegan! Still haven’t seen them in the stores yet though, but I will keep checking! 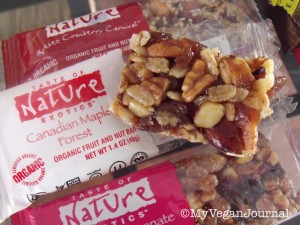 6. Taste of Nature Exotics’ Canadian Maple Forest Fruit and Nut Bars! These were my favorite non-candy snack bars at the show! You could really taste the yummy maple syrup and it was such a simple, uncomplicated bar and not too hard on the teeth. It’s non-GMO too!  Here are the ingredients: Pecans, apricots, Brazil nuts, agave nectar, brown rice syrup, raisins, whole grain brown rice crisps, maple syrup, maple flavor, vanilla flavor, sea salt.  Everything but the sea salt is certified organic. YUM!

I don’t like anything that smells or tastes like fish, so I didn’t sample these, but I sure am happy these are available for those who do!

Fish are so cute! I can watch them swim in a pond foreverrr… so relaxing! Can’t stand it that most folks think they don’t feel any pain.  When people take them out of the ocean, they die a slow painful death… gasping for water, like we would gasp for air if we were drowning. So hurray for fishless filets!

By the way, Jon from The Vegan Zombie (fun cooking videos!) doesn’t like the taste of fish either, but he tried these and said they’re great!   Now I kind of wish I tried them! 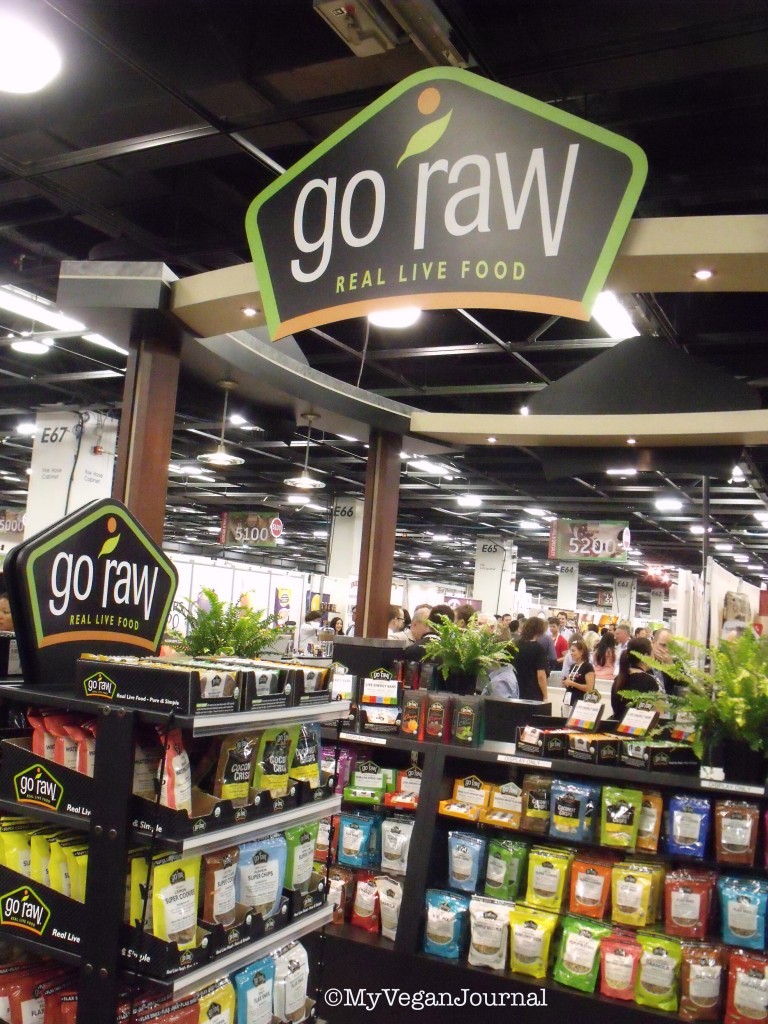 Go Raw always has such a HUGE cool booth! I don’t even know if you can call it a booth… it’s more like a “section.”  I love it! My favorite?  Their Spirulina Bars!  Made from sprouted organic sesame seeds, organic banana, organic coconut (unsulphured), organic date and organic spirulina. You’d think it would taste really GREEN – but the bananas and dates make it nice and sweet! It’s super healthy too!

The bars and chips can be a little pricey in some stores, so I wait for coupons and sales, and then they’re more affordable! 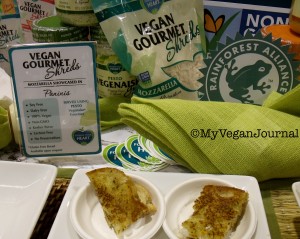 As I mentioned before, I’m not a huge fan of faux cheeses, but this one sure made a great vegan grilled cheese sandwich!! I was really impressed! It’s also made by Follow Your Heart, a restaurant that I’ve visited for over 15 years, so we go waaay back! Their vegan shreds won VegNews’ Best in Show for New Product in 2013!  Was sad to later learn that it contains palm oil, but who knows, maybe there won’t be any next year!? You never know! (let’s keep asking!) 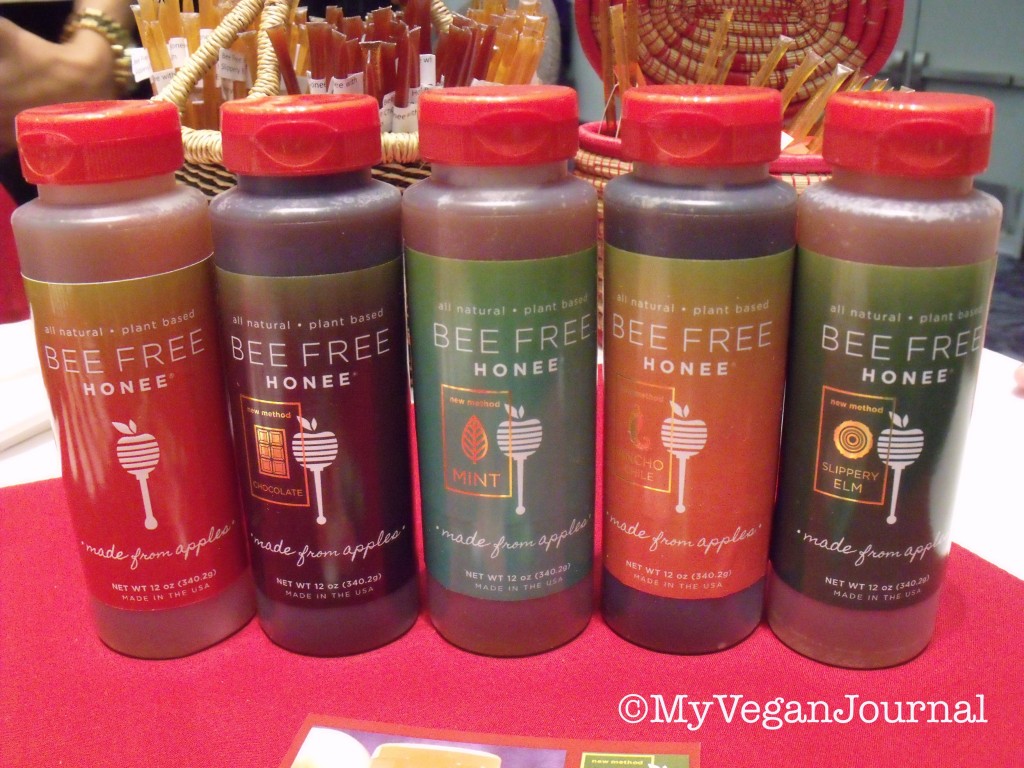 This stuff is AMAZING! Vegans don’t eat honey and I specifically don’t eat honey because a girl once told me about her uncle’s bee farm and how the bees always got squished when they put the lids back on the hives.  But if I ever want the taste of honey, this sure hits the spot! (sometimes I just eat it straight outta the bottle! Sshhh!)

Bee Free Honee is made from apples! The owner and creater, Katie Sanchez,  is so sweet too! She took lots of time to speak with me about how she stumbled across making this.. it turns out she was trying to make a less sweet, pectin free apple jelly, put it aside to sit for the night, and the next morning discovered that she accidentally made something that tastes just like honey! Lots of super yummy flavors too! Like Ancho Chile! Bee Free Honee made it into this year’s Academy Awards Swag Bags too!

What’s also cool is while I was speaking with her, guess who came up and started taking photos?! Colleen Holland, co-founder and editor of VegNews Magazine! Finally got to meet Colleen in person! Super cute and nice, just as I expected! By the way if you’ve never read the magazine, here’s a FREE digital copy to enjoy! Just scroll down the My Vegan Journal Coupon Page a tiny bit, and you’ll see it!

Is that 10 already?! But I have so many more!! Well, ok, I just have to post one more little thing… my favorite sticker from the expo! So, Not, Ew!!, from Alive and Radiant (they make yummy kale chips!). Have you seen The Tonight Show’s Jimmy Fallon skit? Freakin’ hysterical!! If you need a good laugh, here ya go —>  EW!!!

See ya’ll on the My Vegan Journal Facebook Page! xoxo