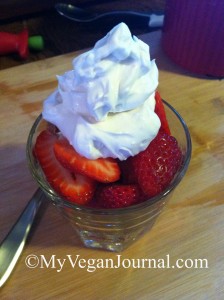 I feel like the last vegan in the world to catch on to this easy, but tasty, way to make vegan whipped cream, but better late than never!

I don’t know about you, but I haven’t had the best of luck with the pre-made vegan whipped cream that comes in a can. I tried the one made with soy milk but the canister seemed to stop working before the contents were empty. I bought the rice milk version of it a few months later, and again… the same thing happened. At about 6 bucks a pop, it’s too expensive of a treat to have malfunctions… alas, no more. I’m making my own! 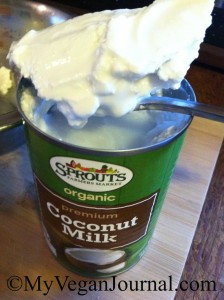 Here’s how you do it!

1) Place a can of coconut milk upside down in the fridge overnight. Get the regular one, not the “low fat” or “light” type.

2) About 15 minutes before you’re going to make your vegan whipped cream, put your bowl and your blender “beaters” in the freezer so they get nice and cold!

3) While they’re chilling down, prepare some nice sliced fruits (I used organic strawberries!), or get your pie out and ready to top! 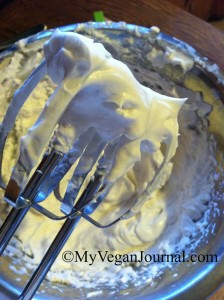 4) Open the can and scoop out the thick part, leaving the really liquidy part behind. You’ll notice a really nice hard clump on the top of the can, and a decent amount on the bottom too!

5) Place in bowl and add vanilla and sugar to taste. I added 1 teaspoon of vanilla and 2 teaspoons of organic sugar, but we’re all different, so add what you think you’ll like!

6) Blend! I used a hand held blender & blended about 1 1/2 minutes or so… and you can see the nice consistency I got in the pictures. 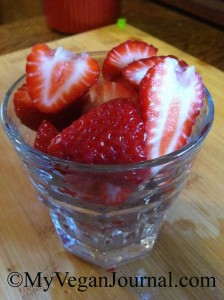 You can usually find canned coconut milk for less than $2 in stores, so this is a great alternative to pre-made vegan whipped cream and it’s DELICIOUS! The only thing I can think of that may be a problem for someone is that it does have a hint of coconut taste – which I love, but if you don’t like the taste of coconut, then you might want to pass on this, or add additional flavors to it. I bet cocoa powder might be nice! 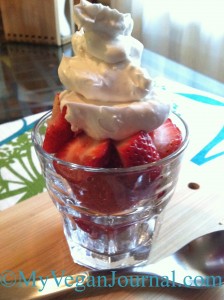 Excited to try this out at thanksgiving on pumpkin pie!! oh YES, it’s gonna be great!! And you know what else is great? The slaughterhouse that was just shut down in Hanford, California for abuse was a place where they slaughtered DAIRY cows who could no longer give milk – and by substituting vegan alternatives like this whipped cream in lieu of taking dairy milk from cows, really helps the animals… and they thank you for that.