Excuse me waiter, there’s a fish in my Champagne! I’d prefer some vegan bubbly, please! 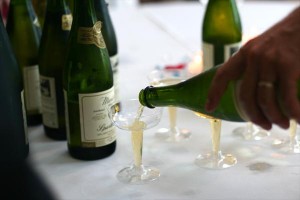 I grew up on the central California coast and on Sundays, my family & I would would often take a relaxing drive to Watsonville, home of Martinelli’s Sparkling Cider! So for me, a nice tall glass of that sweet and refreshing bubbly is perfectly fine for a New Year’s Eve toast! Mmm! ————–>

But for those of you looking for a nice vegan champagne to bring in the New Year with, there are lots of options!

Most wines are made with isinglass, also known as the bladder of a fish. Apparently, some wineries believe it’s necessary to use this odd body part during the fining process. During a recent trip to Napa Valley, I was also told they often use albumin from eggs (stolen from birds) during the filtration process too. It all seems silly to me, considering there are so many delicious vegan beers & wine. 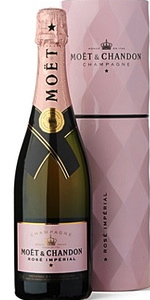 Did you know the average bottle of champagne has 49 million bubbles? Yowza!

Well, if you’d like the scent of the popping bubbles to be from sparkling grapes, rather than eggs and bladders, here are a few vegan alternatives!

And of course Sparkling Apple Cider is vegan too!

As always, it’s best to double check with wineries now and then to make sure they haven’t changed their fermentation or filtering process. I’ve been burned more than once by assuming that foods that were vegan, remained vegan forever. Sadly, that’s not always the case. 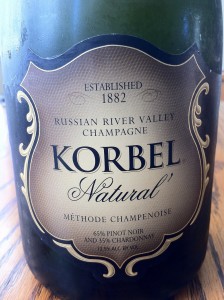 My most recent bad experience with a product going from vegan to NOT vegan, was “Morningstar Farms Meal Starter Crumbles.” I had been using them for years as a base for vegan tacos & chili. Then one day, out of the blue, I opened the freezer and glanced at the ingredients again. Long and behold, they suddenly added eggs and milk to them! Had I not rechecked the ingredients, I may have never known. So gross.

Food companies are pretty good about emailing you back if you write to them with an inquiry. Recently, someone on the My Vegan Journal Facebook page was worried that Sriracha had fish in it, so I wrote to them asking if there were any animal products in their sauce. They responded very promptly. Thankfully, no dead fish. Hopefully you won’t have to drink any dead fish on New Year’s Eve either!