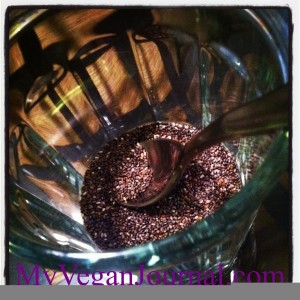 What does several tablespoons of chia seeds + some vanilla almond milk + some brown sugar + some vanilla extract equal?? It equals YUMMM!!! Just put these items into a glass and let it sit for a few hours or so, giving a little stir every so often, and all of a sudden you’ll have something that’s out of this world good! Since chia seeds can absorb 12 times their weight in water by simply sitting there, this mixture slowly works its magic and becomes a gelatinous~like pudding thingy that I can’t quite describe, other than by saying I LOVE it and as soon as I’m done with it, I always want more!

It’s healthy too! Chia seeds really pack a healthy punch. They’re high in Omega 3 & 6, fiber, calcium and protein too! The next time someone starts scolding you for not eating a cute fish for Omegas just start singing “Cha cha cha CHIA!” and give a little wink! You’ll be the smartest & spunkiest guest of the evening! 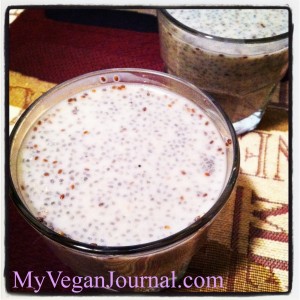 In other vegan food news, I went a little crazy with my vegan stir~fry tonight! Started off in Ireland with some cabbage & potatoes, then I swung by India & added some carrots, peanut sauce & curry, then went to the South & added collard greens & onions, and wound up in Asia with some organic soy sauce, seitan & mung bean noodles! Miso Silly haha! It was tasty! Kind of makes putting an apple in last night’s soup seem almost normal lol! 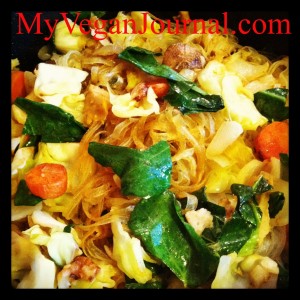 And a bit of good news…San Francisco (i LOVE the bay area!) is about to get its very first all vegan store! Pinko’s Vegan Mercantile will be opening next month, with a storefront facade that can be seen clearly by every single car that enters and exits the freeway at Market Street. Have you ever been to an all vegan store before? They’re awesome! I went to “Food Fight” in Portland, Oregon and wow – how nice it was to be in a store where I didn’t have to check the labels on anything! If you live near Olympia, Washington, you’ve got “Oly Vegan” too! 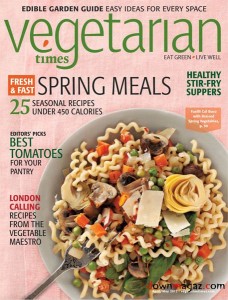 Lastly, if you need more vegan recipes, here’s some great news! There’s a FREE digital copy of the current April/May 2013 issue of Vegetarian Times and it has lots of vegan recipes in it!

Have a vegantastic day!
“I ask people why they have deer heads on their walls. They always say because it’s such a beautiful animal. There you go. I think my mother is attractive, but I have photographs of her.”
~ Ellen DeGeneres.

← My no recipe vegan & tasty “Everything (even an apple!) Soup”
Mean Green Juice from “Fat, Sick and Nearly Dead” →