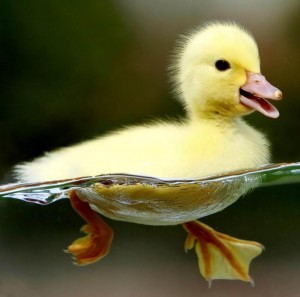 It’s a sad day for ducks and geese. You know – ducks and geese – the ones most of us fed breadcrumbs to as a kid.  The ones who float around on a lake, or stream, and stick their cute feathered bottoms up in the air when they dip their heads down into the water. The ones who in the springtime paddle around gracefully followed by a straight line of cute, fluffy baby chicks.  Yep, those guys. The ones who bring people so much joy, simply by living, and letting us watch.

I have empathy for some folks who aren’t aware of the suffering of animals in factory farms.  I like to think that maybe – just maybe – they just aren’t aware of how much the animals suffer before they become a hamburger, or don’t know what happens to them while producing eggs, and their sad fate when they no longer can.  But there are three “there’s no excuse” items in my book.  Unless you’ve had blinders on, ear plugs in, or have a heart made of coal, you know it’s unconscionable to wear fur, eat veal, or consume foie gras.  Why? Because it’s not the 50s anymore, it’s 2015, and it’s common knowledge that the production of these items is horrifically cruel and completely unnecessary. You know it, and I know it.  If you need a refresher on foie gras production, you can watch this video narrated by Kate Winslet.  I’ll pass; tears and typing don’t mix well.

Foie Gras means “fatty liver” in french – and it’s produced by jamming tubes down ducks’ necks and force feeding them until their livers expand many times larger than they should be. Have you ever had a little pimple on your face that expands? It’s painful.  Imagine having someone blow one of your internal organs up…. because, well, someone wants slit your throat, take out your liver and smash it up for a pâté. What year is it again? Feels like I’m writing about Sixteenth century torture at the Tower of London. 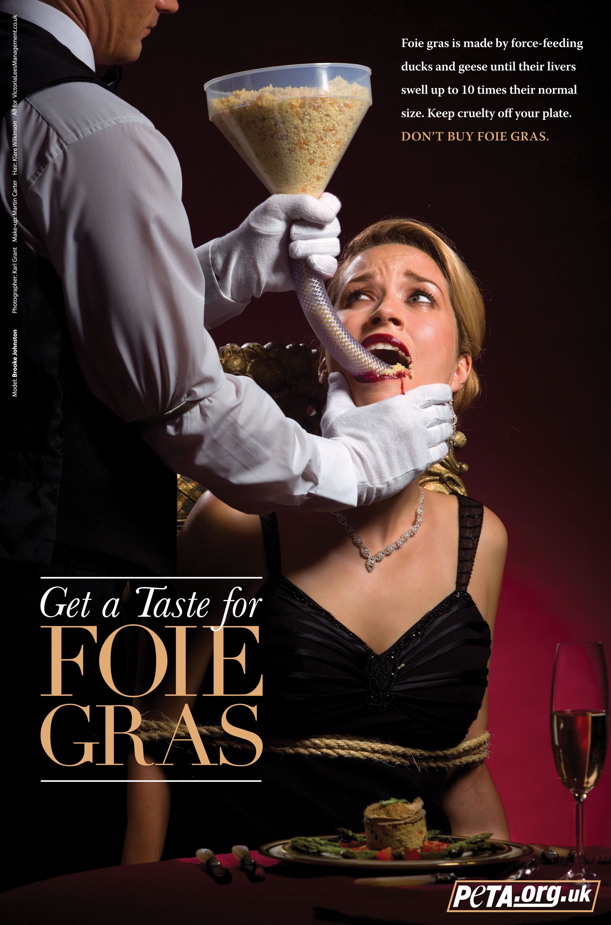 In a nutshell, the foie gras twist goes like this:

California Health & Safety Code § 25980 states, “A product may not be sold in California if it is the result of force feeding a bird for the purpose of enlarging the bird’s liver beyond normal size.”

A zogby poll found that 77% of U.S. adults believe force feeding ducks and geese should be banned, and over 95% of California restaurants didn’t even serve foie gras.  Cities across California had already banned foie gras – including Los Angeles, San Francisco, San Diego, Berkeley, West Hollywood, Carlsbad, Solana Beach, and Laguna Woods. Even supermarkets and retailers including Costco, Safeway, Target, Giant Eagle, Whole Foods Market and Wolfgang Puck had already stopped selling it prior to the ban. They all knew, as we know, it’s cruel.

But as you can imagine, out-of-state foie gras producers, retailers, and importers were not happy with our golden state and it’s feel-good, be kind to animals policy. No foie gras meant less money in their pockets. So they brought suit – on July 2, 2012 – the very day after the law went into effect – and today the judge ruled in their favor, saying the California statute was trumped by the federal Poultry Products Inspections Act when it comes to regulating the sale and distribution of foie gras. Under the Supremacy Clause of the Constitution, Congress has the power to preempt state law.  So as of this morning, the law banning the sale of foie gras in California – by out of state producers – no longer exists; it has been revoked. If you’d like to read the court’s decision, here’s the full brief.

It’s so bothersome how most folks complain that the federal government has too much power, and states should be able to make their own laws – they love the “hands off our laws” policy. But then as soon as a state says they want to pass a law to help the animals, suddenly it’s ok for the government to step in. Oh, they love the Supremacy Clause then! It’s a big-brother love fest if it lines their blood stained pockets. So frustrating.

And there you have it. Some folks just can’t remember who they tossed those breadcrumbs to – and who put a smile on their face – at no cost, and for no favor. So sad. Chin up though… I’m not the only one who isn’t giving up. Have hope.  BE the change.

Tomorrow I will write of happy things…