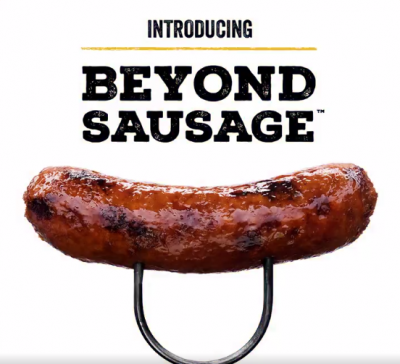 Beyond Meat has done it again!

Introducing… vegan Beyond SAUSAGES with less fat, less sodium, less calories (yet more protein!) than sausages made from animals.

A win-win for all!  And the environment, too!

How did they do it?

Well, like their scrumptious vegan Beyond Burgers – sold in over 5,000 supermarkets across the country – their sausages get a tint of “meaty” color from a splash of beet juice.

For the “juiciness” they use a little coconut oil.

And for the skin-like “casing,” well, it’s from algae!

Are vegans creative, or what??! 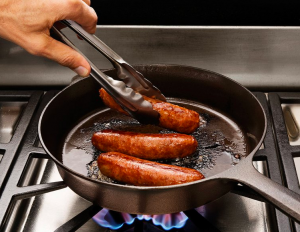 These plant-based sausages are a beyond welcome alternative to sausages made from various body parts of animals squished into a long sac of someone’s translucent skin. BLAH!!! No thanks!

They’re currently being sold at the Beyond Burger Restaurant inside Whole Foods Market in Boulder, Colorado, but as with all yummy vegan food these days, there are plenty of plans for expansion.

*Did you know? Animal agriculture is the LEADING cause of species extinction, ocean dead zones, water pollution, and habitat destruction, too.* 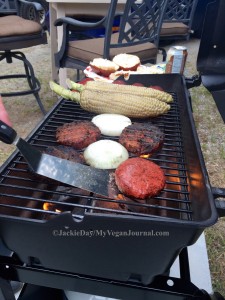 Beyond Meat has the support of Bill Gates, Leonardo DiCaprio, Twitter co-founders Biz Stone and Evan Williams – and as I wrote in my book, The Vegan Way – even the former McDonald’s CEO Don Thompson jumped ship and became a Board Member at Beyond Meat – and with good reason: their products are tasty, and help make the world a better place!

As I mentioned over the summer, Beyond Meat’s 100% plant-based burgers even satisfied my meat-loving in-laws.

When the burgers first launched, they sold out in just one hour! Hot diggity dog! I mean, burger lol. *wink*

TImes they are a changin’ – for the better! For me… for you… and the entire world, too!