Alas, it’s another new year and I really think its is going to be GREAT! If I weren’t vegan already, I’d go vegan for my New Year’s Resolution, but since I’ve been vegan for almost 25 years, it’s time to do something else!

I’ve decided to give up 4 vegan food items that I love to eat, but I know aren’t good for me! 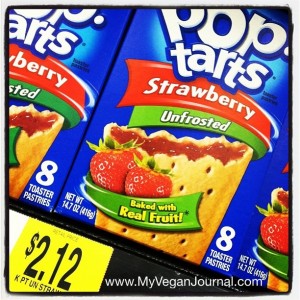 Yes, they’re vegan (shocking, I know!). And no, they don’t have any trans-fat. But I know I’d be much better off eating organic corn chips that aren’t coated with MSG and that haven’t been genetically modified into a frankenfood. These Doritos taste SO darn tootin’ good, that when I open a bag of them, I eat WAY more than I should… this is gonna be tough. But I can do it.

It’s true, Kellogg’s Pop Tarts without frosting are indeed vegan. I love them so much, I can eat them without even popping them in the toaster. When I want a sweet treat, I’ll have to learn to pop open some sparkling cider or bake something more wholesome from scratch instead. I’ll just be sure to always have a big, beautiful, colorful bowl of sweet fruit on the table. I really CAN do this!

For years, Oreos used make them with lard (gross!!). But when they recently started making them vegan, I started gobbling them up! But you know, they’re just too convenient – and processed. If they’re not in front of my face, then I won’t eat them. 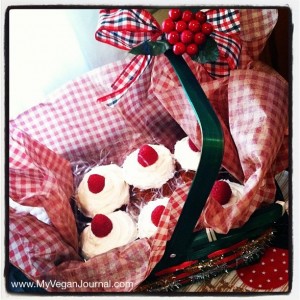 Ok, this is going to be the most difficult! Look at how pretty my holiday cupcakes came out this year! They’re made from a Duncan Hines Spice Cake Mix (it’s vegan!).  They came out perfect, and everyone loved them! I used “Energ-G Egg Replacer” in lieu of eggs and voila, beautiful cupcakes!! But honestly, they’re full of crap! lol. So cake mixes are out, vegan bakeries are IN! (I’m healthy, but reasonable!) 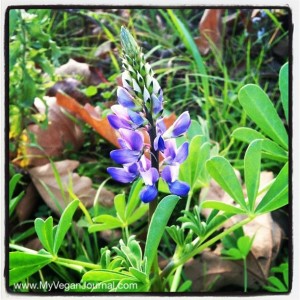 I figure if I eat better and exercise more, I’ll be able to stay on the planet longer to help animals. They need every single one of us day in and out to fight against the horrific cruelty and abuse they endure. If I’m ill, I won’t be of any use to them. So I’ve gotta exercise more! Today, I went hiking in Malibu and had a beautiful, energetic day in the fresh air and sunshine. And my muscles are aching quite badly as I’m typing this, so I’m pretty sure it was a good workout that my body appreciates. I even found my favorite flower as I was walking… the purple lupine. In all her glory and perfection. –>

Here’s to being a healthy vegan! Cheers!

Best wishes to everyone as we embark on 2012. I have a pretty good feeling about this year!
À votre santé!

[flash forward 3 years to the cusp of 2016 and guess what? I still don’t eat that stuff! Mission accomplished! Happy New Year!]