Vegans Around The World Are Writing THIS Message On Starbucks Coffee Cups! 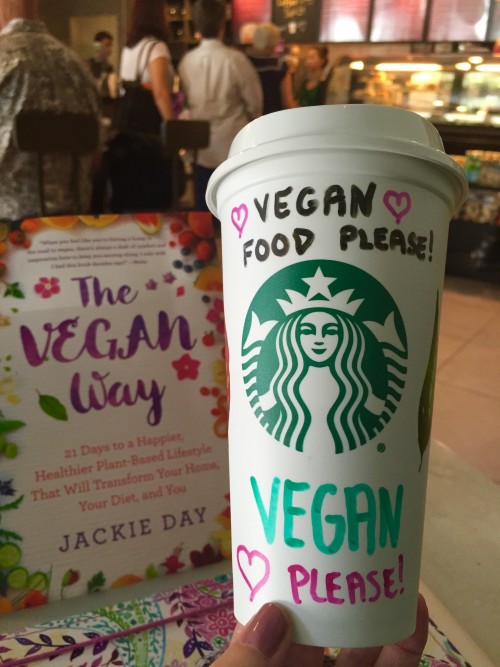 Ever notice how many vegan sweets and treats there are at mainstream coffee shops, other than Starbucks?  I have.

Let’s get some vegan food options at Starbucks! Beyond the lone bagel, chips and guac!

Steadfast animal advocate and journalist, Jane Velez-Mitchell has teamed up with the folks at Compassion over Killing and here’s what they’re asking us to do:

4.  Then post it on social media with the hashtag “#VeganStarbucks and tag Starbucks!

[I’m going to add #NationalCoffeeDay and #CoffeeLoveCups to my photo, too!]

Starbucks DID launch the “Vegan Lentils & Vegetables Protein Bowl with Brown Rice” but it came and went in a flash.

I’m told it sold really well, but where is it now? Gone within a few days at my local Starbucks. I didn’t even get to try it!  Why, Starbucks, why?

Starbucks proudly proclaims its coffee is “99% ethically sourced” but when it comes to FOOD and ethics, Starbucks turns a blind eye.

Almost all of Starbucks’ food is laden with meat, eggs, fish and dairy, produced by an industry that profits from the intense confinement, abuse and slaughter of billions of animals.  Big Ag is destroying our environment, too; the same environment Starbucks claims to care about. 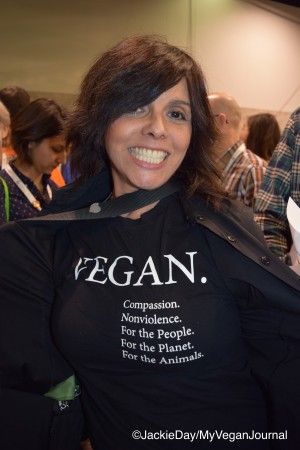 I don’t live in a big vegan-lovin’ town like Los Angeles or Portland, and even HERE my Starbucks barista today is vegan and expressed sincere empathy – and a longing for more vegan fare.

Once I went to my local Starbucks and all THREE baristas behind the counter were vegan. It’s no secret that everyone is going vegan; and we get hungry!

Sheesh, you’d think Starbucks would get some vegan options just to make their employees happy, for Pete’s sakes!

Speaking of Peet’s… did you know Peet’s Coffee not only has an array of vegan cookies, they have savory (and filling!) vegan meal options, as well.  And scrumptious vegan whipped cream to top those yummy beverages, too!

So, get with it Starbucks!

As the saying goes: If you don’t listen to your customers, someone else will!