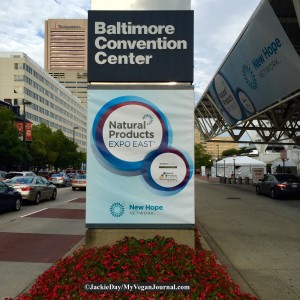 EVERYone is going VEGAN! 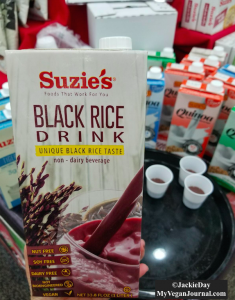 There’s an abundance of new and delicious plant based milks and every time I go to an expo I see more!

In addition to cashew, walnut, peanut, flax, almond, oat and hazelnut, I came across “black rice” milk for the first time!

There’s something for everyone! And that’s great news for all the cows of the world, and your health. (DAIRY: Not your mother; not your milk!) 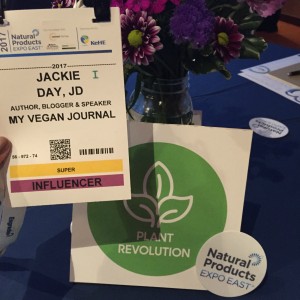 AMAZON WAS SHOPPING FOR HEALTHY FOOD!

Yep. I was gobbling up a sample of vegan caramel ice cream, turned my head, and there he was! An Amazon rep asking the ice cream rep if their products could be shipped via Amazon!

As most of you know, Amazon recently bought Whole Foods Market. For some, this seems like a detriment; another giant company scooping up a smaller one.

On the bright side though, this means greater access to fresh produce and healthier fare for those who have trouble finding them at a good price – and for those who can’t find them at all!

Knowing Amazon is on the lookout for healthy food is great news!

The term “Nut Product” has been replaced with “Vegan Cheese” on the updated packaging of Miyoko’s tasty cheese wheels!

And there are NEW vegan pub cheeses, and cream cheeses, too!

They are SOOOO scrumptious.

I toured Miyoko’s production facility when I was doing research for my book, The Vegan Way. It was amazing! I JUST LOVE THIS COMPANY!! 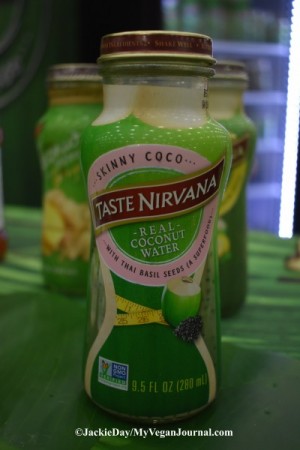 Basil seeds expand in liquid just like chia seeds do, and apparently adding them to beverages in Thailand is super popular.  I didn’t know that!

Coconut water is pretty much my favorite beverage, so any novelty in this category catches my eye.

Although I prefer Taste Nirvana Coconut Water sans seeds (it is SOOOO good just as is!), I still think the idea of adding basil seeds is super cool, and healthy. They have one with passion fruit seeds, too!

I could drink this stuff by the gallon.  No joke.

My husband loathes chocolate, and I only like it if it’s sweet and smooth.  Luckily that doesn’t seem to be a problem these days for vegans!

I got cozy in my hotel room and enjoyed handfuls of vegan “Unreal” chocolates that I gathered at Natural Products Expo East.

Paired with a hot bath = a night of sweet self-care. It’s A-OK to indulge once in a while, ya know!

The “Unreal” crispy dark chocolate cups filled with almond butter are my favorite! 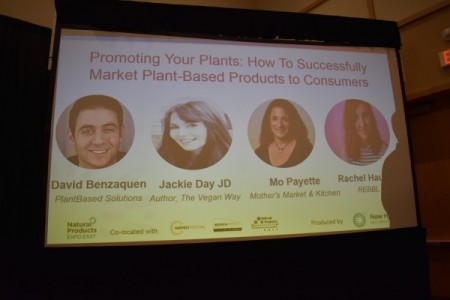 I started going to Natural Products Expo West over 10 years ago as a “buyer” in search of healthy beverages to replace the soda we kicked out of the Los Angeles Unified School District.  I don’t recall there being a single talk on the virtues of a plant-based diet back then.

Flash forward to 2017, and there’s an entire track called the Plant Revolution!

I was lucky enough to be selected to speak on how to market plant-based foods to consumers. It was a packed house, and tons of fun!

The Q&A session was wonderful, too. Companies even went as far as to ask for tips to replace honey in their products. They genuinely wanted to know why, and how. This is how far we’ve come.  This makes me SO happy! 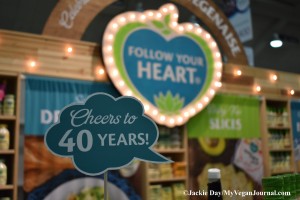 Can you list all the different types of vegan mayo there are on the market today? I think I’ve lost track!

There’ Trader Joe’s, Hampton Creek, Whole Foods – geez, even Unilever, owner of Best Foods, has their own vegan mayo.  There are so many – including Follow Your Heart’s Veganaise, celebrating its 40th anniversary this year. Hurray!! 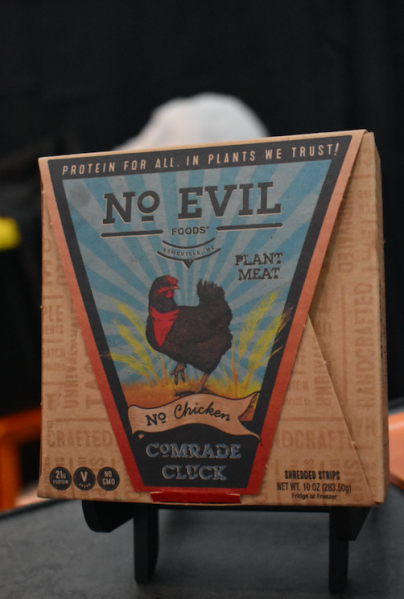 No Evil Foods is based in Ashville, North Carolina, and not only do they make super tasty vegan chicken, vegan jerky, vegan chorizo, and more… their packaging is SUPER cute!

The unique wrappers and boxes are adorned with drawings and all sorts of little facts and tidbits about how much you’re helping the world by eating plant-based foods!

Think cereal boxes (staple reading when we were kids!) but instead of “rules to win a cheapo plastic prize,” you’ll find… how many trees or gallons of water are saved by eating plants instead of animals.

Expo East does, too; No Evil Foods won a coveted “Nexty” Award!

In addition to taking photos of the yummy vegan happenings at the expos over the years, I’ve also been documenting the booths which are less popular.

I was going to post a few photos, but I’m staying polite here, and don’t want to showcase any failures.

I’m not happy businesses are losing their money; I’m happy animals are winning their lives!

Suffice it to say, I think animal based products will continue to decline, and companies will transition to creating healthy, plant-based fare – and THAT makes THIS vegan happy!

According to a 2015 Neilsen report, despite grocery sales being down, sales of plant-based foods are UP to $3.1 BILLION; a growth of 8.1% within just one year! Now that’s something to celebrate! 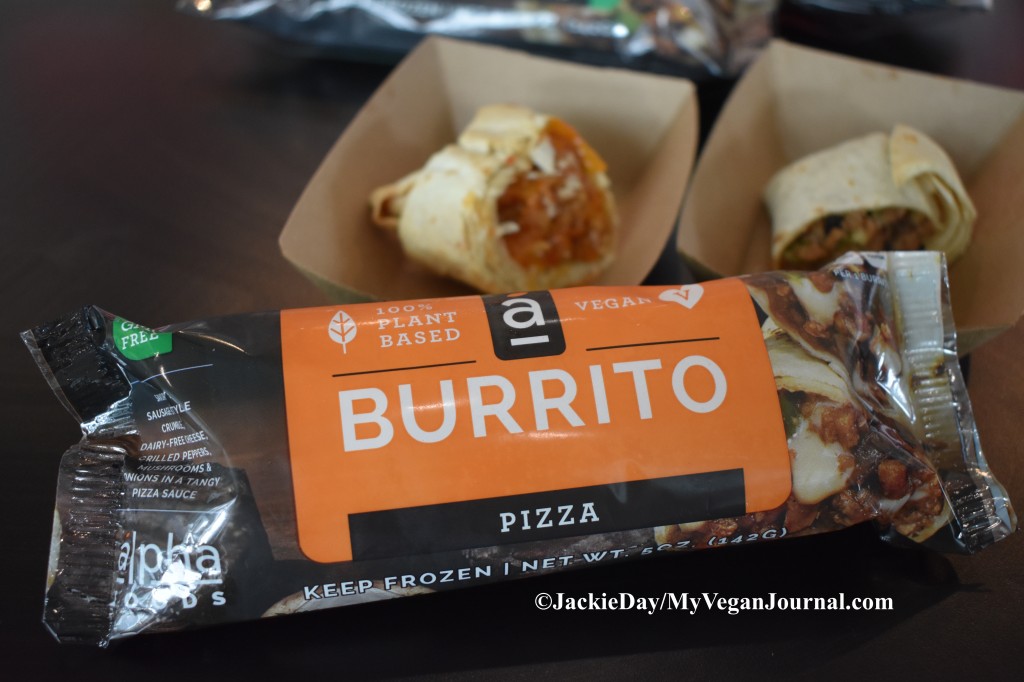 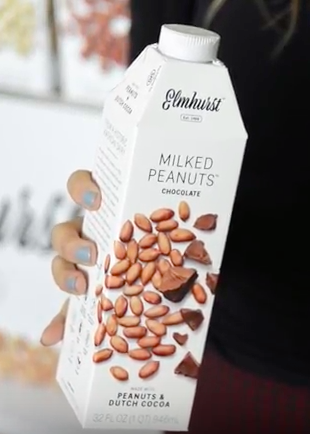 I tried the Philly Sandwich Burrito and the Pizza Burrito; both were outstanding! They have spicy Chick’n Fajita and Mexicali burritos, too, for those who like a little extra kick.

And get this… you’ll be able to find them in mainstream markets next year. Tasty, compassionate and convenient!

I’m excited to try their vegan hot dogs, meatballs and burgers, too.

Check out this cute plant-based milk video put together by Jenna and Jessie at Expo East!

It’s a great time to be vegan!