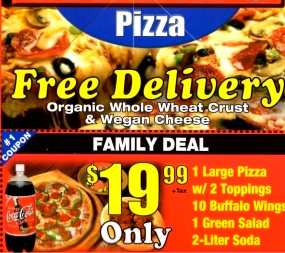 For months now, we’ve been arriving at home to find weekly flyers from a local mom & pop pizza joint hanging from our front door nob. The restaurant touts a wide array of veggie toppings, as well as the usual “meat” lovers’ selections and sides. Everything from ribs and chicken wings, to salads, “wegan” cheese and cheesecake. Definitely not a health conscious establishment, but a pizza place whose coupon you might stuff into the back of an “everything” drawer in the kitchen in case you get a late night fiending for some cheap cheese-less vegan pizza. And that’s where they sat… for months… about 12 of them. Until out of the blue, I thought “What in the heck is Wegan Cheese??!” “Could it possible be??… No, there’s just no way.”

A quick google of “wegan” didn’t reveal anything other than “Did you mean vegan?” So I had my husband call the restaurant, and sure enough… they meant VEGAN! You know, there are lots of people in the world who aren’t familiar with the link between our diet and the well being of the planet, nor do they know how to spell this so-called “strange” lifestyle called “vegan.” But heck! We’ve come a long way from a chunk of plain white tofu with a plate of beans and rice! Just a three minute drive, and voila, we were indulging in scrumptious cruelty-free pizza at a very unlikely place… because, times are a changin’ =) Have hope, my friends!

← My Vegan Journal
Hugs are for Horses & Cuddles are for Cows →