On the 8th Day of December, I wrote about 8 Vegan things and a Partridge in a Pear Tree! 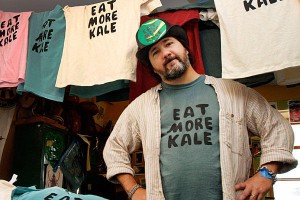 Can you believe Chick-Fil-A is suing artist Bo Muller-Moore, a guy who simply makes “Eat More Kale” T-shirts in his garage? They’re claiming that the saying confuses customers because it’s too close to their slogan is “Eat More Chikin.” Are their customers really THAT dumb? (maybe they have a B12 deficiency?) The good news is that all the hub-bub, inspired Anderson Cooper to cover the story on his show, during which he said he had no idea what kale was. This triggered Anderson to put HIMSELF on the “Ridiculist” yesterday, and it threw kale straight into the spotlight of mainstream America. Hopefully more people will try it now. It’s SO tasty and healthy! They’re certainly buying more of Bo’s T~shirts!

As most of you know, Quorn products have eggs & dairy in them, but there’s good news! Quorn just announced they’re releasing their very first vegan product: a vegan patty! The new vegan burger will soon be available in over 1,000 stores from coast to coast, including Giant, Shaw’s, Stop & Shop, and Whole Foods Market.

Hungary just destroyed 1000 acres of maize found to have been grown with genetically modified seeds. It’s illegal to grow GMOs over there. Take that Monsanto! Hopefully they’ll be illegal in the U.S. one day too! That is if we can ever get that company untangled from politics. I could write an entire book on the topic, it makes me that mad.

I always wondered how to make it vegan! Here’s what you do! Just mix (and shake if possible) the following ingredients:

3/4 cup whiskey
1 pint vegan hazelnut creamer or plain vegan creamer with 1 teaspoon almond or hazelnut extract
3 tablespoons dark chocolate syrup (you can make your own, or use Hershey’s! It’s vegan! Although it’s certainly not as healthy as portrayed in the super cute ad!)

You can drink it plain, add to coffee or a vegan ice cream shake! Serves: 4 ~ Cheers! 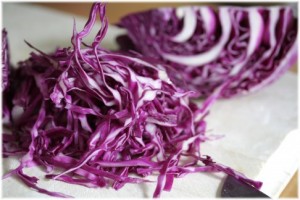 I don’t eat Uncle Ben’s, but just thought to give you the heads UP that Mars Food US just recalled Uncle Ben’s “Whole Grain White Rice Garden Vegetable” due to undeclared milk in its products which were distributed to 31 states, from California to New York. For more information you can contact Uncle Ben’s at: 1-800-548-6253.

It’s my new vegan find and I love it! Sauerkraut allegedly boosts the immune system, reduces heart disease, hinders growth of certain cancers, and stimulates digestion. It also looks pretty on my plate and tastes super good! I found giant jars of it at a good price at Big Lots, but I think I may make my own as soon as I run out. Looks easy enough! 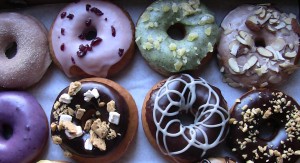 Babycakes NYC will be opening in Larchmont, NY at the end of this month! And Dun Well Doughnuts just opened in Brooklyn NY, serving over 50 flavors of vegan doughnuts, including Boston Cream, PB & J, Peach Cobbler, Root Beer, Green Tea & Ginger, Butterfinger and Sugar Plum! I don’t live in NY, so to make myself feel better, I just bought a doughnut maker! Another new vegan store, Oly Vegan, will also be opening in Olympia, WA in a few days. They’re not a bakery, but they will be selling all sorts of nifty vegan goods and… chocolates! 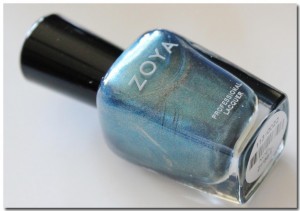 Pearl or Frosted Nail Polishes are generally made with fish scales. Fish are so sweet, I just can’t imagine killing them or using their bodies for something so stupid. If you’re buying new polish for the holidays, try to buy polish that’s “vegan” (like Zoya or Wet & Wild), or if you want your polish to be sparkly & cruelty~free, make sure the glitter in it is chunky (not pearly), or you can sprinkle glitter on your matte or clear polish yourself, and then coat with another layer of clear. Check out the Cruelty~Free List if you’re not sure which polishes are vegan.

… ♫ ♪ and a partridge in a pear tree! ♫ ♪ Just as all birds should be… in trees, or playing on the ground, free to fly away from danger, free to fly to those they love, free to fly wherever they want.