New Vegan Food At Trader Joe’s For The Holidays! 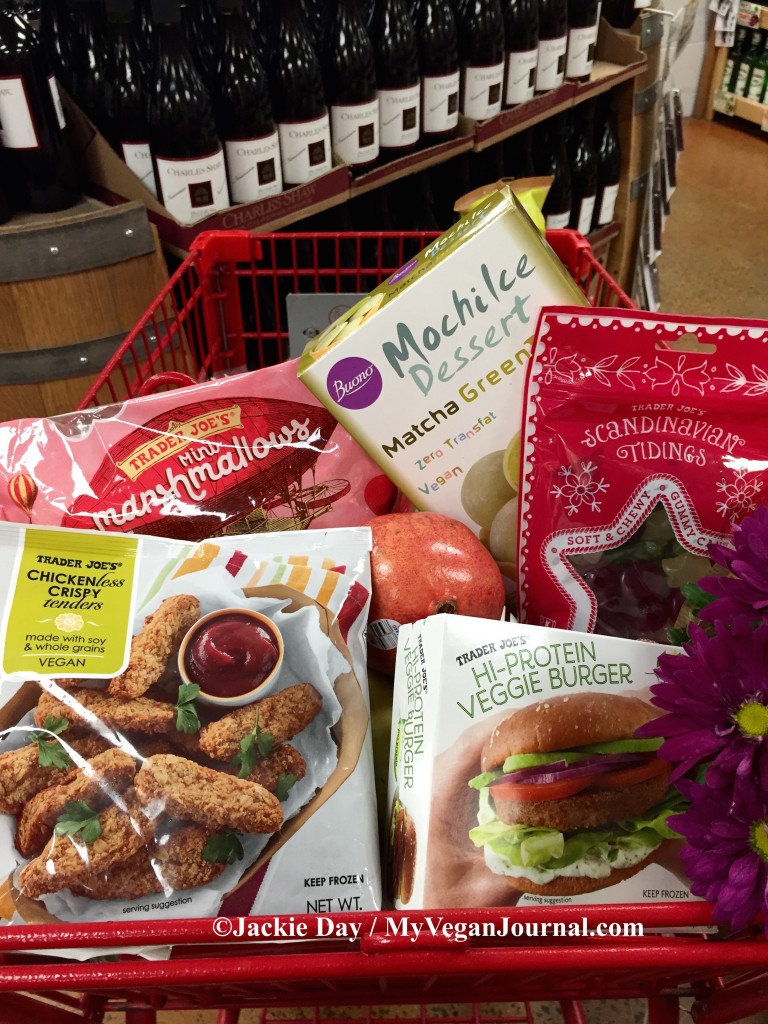 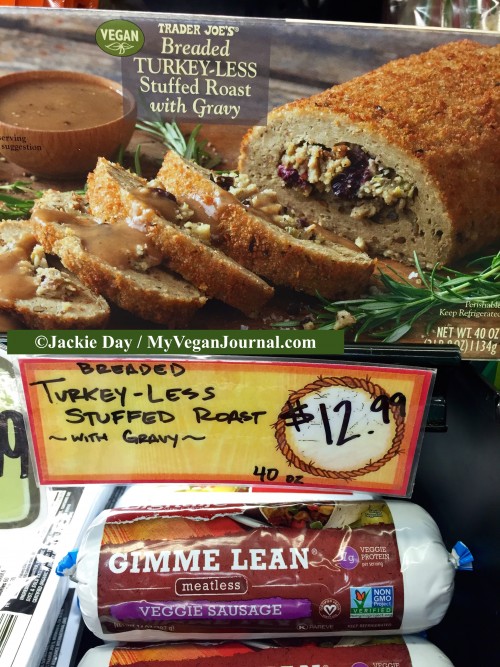 As I mention in my book, The Vegan Way, Trader Joe’s truly IS a vegan oasis!

Check out all of the new vegan holiday food that just arrived!

I’ll try to keep the words brief, and let the photos do the talkin’!

And Trader Joe’s still has vegan veggie sausage too, for those who want to make a cottage pie or perhaps some yummy sausage patties for a holiday breakfast! 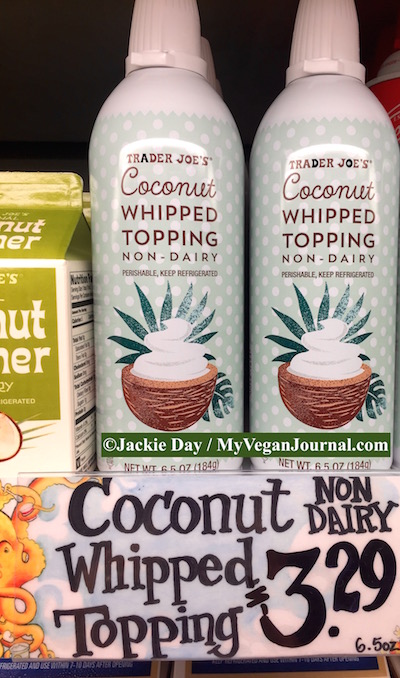 (And here’s an EASY recipe to make Vegan Whipped Cream at home if you prefer!)

Green beans are nothing new at Trader Joe’s!  They even have vegan canned crispy onions to make string bean casseroles, too.

What IS new are these Butternut Squash Zig Zags! I fried a pack up with onion, garlic and a drizzle of Trader Joe’s Balsamic Glaze, and oooh, la laaaah!

Scrumptious! And action-packed with vitamin A! 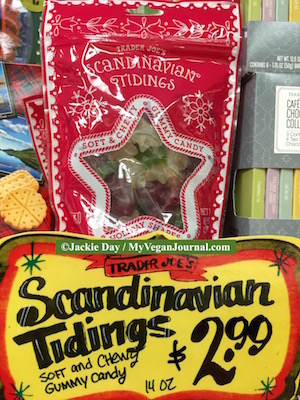 And for a sweet treat…

Unlike most gummy candies, these are gelatin-free aka: no boiled hooves, bones or tendons in these tasty chewy treats!

P.S. Did you know “Swedish Fish” candies are gelatin-free, too!?  Yep! 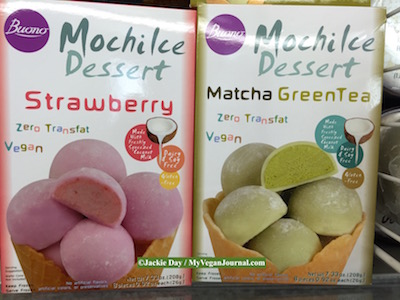 Mochi is made from pounded sticky rice, and in this version it’s filled with vegan ice cream. 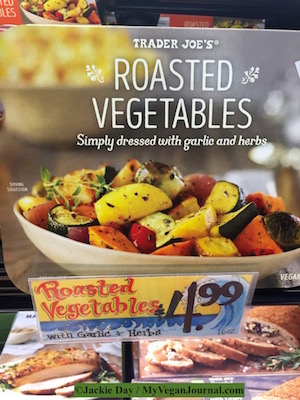 You’ll find these easy-to-prepare roasted veggies in the refrigerator section!

There’s another new version of roasted veggies (with 3 varieties of potatoes!) in the freezer section, too. I just tried them: two vegan thumbs UP.

AND, there’s a new frozen vegan medley of stuffing without bread – made with a cauliflower “rice” base, instead.

I prefer traditional vegan stuffing, but if you’re avoiding bread, check it out! 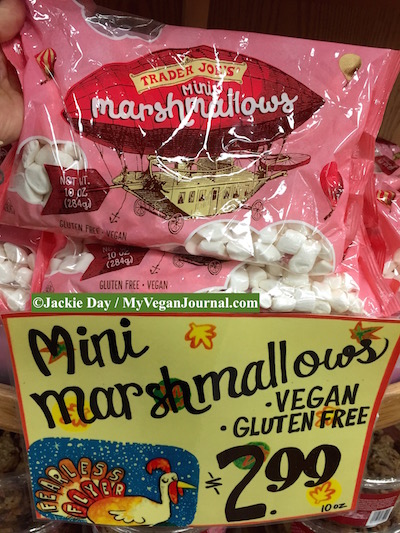 Most marshmallows in the market contain gelatin, but not these!

They’re not healthy, but they’re definitely cruelty-free and TASTY!

And these mini marshmallows are perfect for topping hot cocoa or holiday nog! 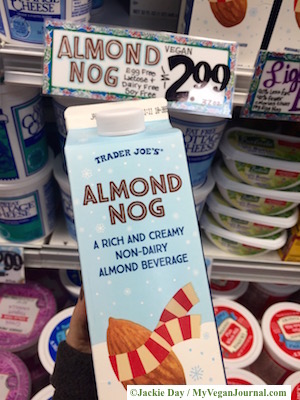 Tis’ the season for vegan nogs! So many to choose from these days, too.

Trader Joe’s also has a decadent vegan chocolate-mint beverage, but I don’t like mint, and my husband loathes chocolate, so…. we didn’t buy any lol. 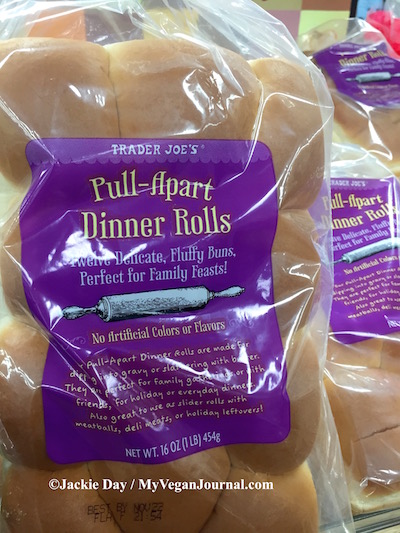 Trader Joe’s now has super soft dinner rolls made without any dairy, honey or eggs!

It does’t say “vegan” on the package, but I called to confirm: it is indeed vegan.  No animal products 🙂 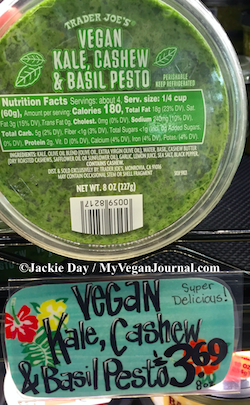 This pesto is delicious.  I’m actually eating a bowl of pasta mixed with this pesto right now.

I put a splash of Bragg’s Aminos and some cracked black pepper on it, and my husband added a bit of TJ’s hot sauce, too.

Excited to find some new vegan burgers in the freezer section!

Have YOU ever heard of a friend or family member with protein deficiency diseases such as marasmus or kwashiorkor?  Probably not.

But for those who are worried… here are HIGH protein burgers! They’re made with pea protein.

Hey, the more vegan burgers, the merrier.  And if a “high protein” label emblazoned on the box helps sell em’? Great!

Brussels Sprouts on the Stalk

They are BACK! And they are beautiful!

Suffice it to say, there’s a heck of a lot of new stuff right now at Trader Joe’s!

There’s even MORE than I put in this post (including the return of the vegan chicken nuggets!), so stay tuned, as I’ll be sharing more soon.

Hope your holiday season is off to a lovely start, and that you find all the yummy vegan food your tummy desires!