My no recipe vegan & tasty “Everything (even an apple!) Soup” 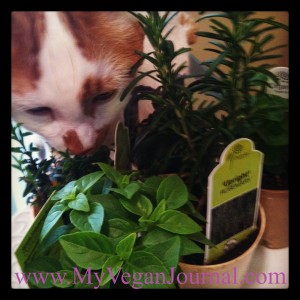 So many cookbooks, so little time? Have a little faith in yourself and whip up something with what you have on hand! Creativity is fun!

There’s no recipe for this soup, but I’ll happily tell you what I put into it! First, I had some leftover veggie stock that I put into a very large pot. Then I added several cups of water, a chopped yam and a chopped potato, several large leaves of chopped organic swiss chard (sadly, they were out of dinosaur kale at the store – bummer!), 1/3 head of chopped cabbage, one stalk of chopped celery, diced onion & leeks, chopped fresh ginger & garlic, nutritional yeast, sea salt and pepper. And a teenie tiny bit of Sriracha for good measure!

Then I noticed that there was a giant red apple in the fruit bowl that had that “I’m not as crispy as when you bought me” ‘look’ so I thought, what the heck, I’ll chop it up and put the apple in the soup too! Extra fiber – whoohoo! And there was a lime that was past its prime too, so I sliced it in half and squeezed a little bit of it into the soup as well. And for protein, I tossed in some organic quinoa that was left over from last night’s dinner. 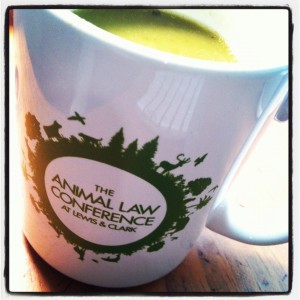 Lastly, I picked a few stems from the herbs that I recently bought: winter savory, rosemary and greek basil. Chopped them into fine pieces and added them to the “brew.” Boy, let me tell you… my hands sure smelled great! Nothing like fresh garlic and herbs on the fingers… i love it!

I brought everything to a boil, then simmered until everything was relatively soft. Then I took out all of the non-liquid pieces and threw them into my cheapo blender. Once puréed, I added them back to the the liquid part of the soup and stirred.

Voila, perfect and amazing vegan soup! Without a recipe – but with a taste, scent and appearance that any fine restaurant would proudly serve. I’m enjoying a nice hearty mug of it right now.

And if you’re in a smoothie kind of mood, check out my No Recipe Cheapo Blender Vegan Smoothie! Bon Vegan Appétit!