Making Vegan Enchiladas… because now we have cheese that actually melts!

You’d think after being a vegan for over 20 years I would have made vegan enchiladas before considering how much I enjoy cooking and how much I love Mexican food! However, it’s only recently that we’ve had vegan cheese available that actually tastes good and melts! So alas, the time has come… 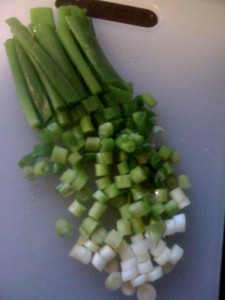 I didn’t have a recipe, but I figured I’d just buy what I thought went into enchiladas and go from there. I bought 1 can of Rosarito’s Vegetarian Beans (16oz), a pack of fresh corn tortillas, a small can of chopped olives, shredded Daiya Vegan Cheese, a bunch of spring onions, a can of enchilada sauce (15oz) and a bunch of fresh spinach. Our little cat, Angie, approved of the cholesterol-free beans & the minimalistic 3 ingredient tortillas containing only corn, water and lime. 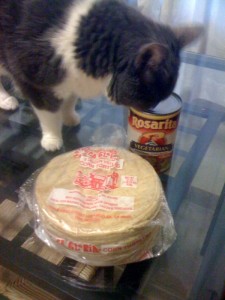 I had no idea how to make the tortillas malleable so they wouldn’t crack when I rolled them, so my husband put in a quick call to his mom to ask what the trick is. She said just pop them in the microwave for 40 seconds, 3 at a time, and then they’ll be soft enough to roll without breaking. Sure enough, she was right!

After microwaving the tortillas, I spread approximately 2 tablespoons of beans in each tortilla and sprinkled them with spring onions, chopped spinach and Daiya cheese and rolled them up. I then poured approximately 1/3 of a cup of the enchilada sauce in a large oven safe cooking dish and then carefully placed 6 very plump & fragile enchiladas into the sauce with the open ends facing down. Then I poured another 1/3 can of enchilada sauce on top, and garnished the top with about 1/2 can of sliced olives, a bit more Daiya cheese & spring onions to taste. 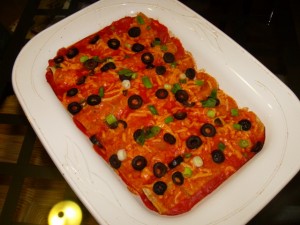 Then I popped them into the oven at 350 degrees for about 20 minutes, and voila… Vegan Enchiladas! They were scrumptious!! We also had some vegan veggie “meat” crumbles that I was going to stuff in them too, but I forgot… maybe next time!

1 comment for “Making Vegan Enchiladas… because now we have cheese that actually melts!”