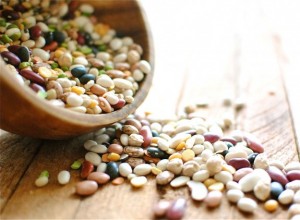 So, I finally took the slow cooker I bought weeks ago out of the box! I decided to not use a recipe, and just use up ingredients I had handy in the kitchen. As you know, I’m not much of a cookbook user, just a cookbook collector. I just like having fun in the kitchen & seasoning to taste!

I wanted my stew to have lots of protein, so I used 1 cup of Trader Joe’s 17 Bean & Barley Mix! It’s awesome! 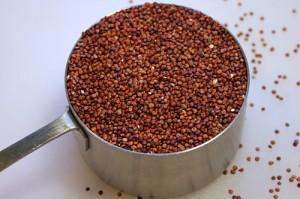 I also wanted the stew to be colorful! When food is colorful, it usually means you’re getting lots and lots of vitamins! So I chopped up several leaves of fresh organic dinosaur kale (one of my very most favorite veggies ever!), 3 sweet potatoes and an onion & tossed them in with several cups of water & tomato purée.

The amount of liquid you add will really just depend on the size of your slow cooker & the amount of veggies you use. And don’t forget to leave an inch or two at the top to allow room to simmer. Then I added 1/4th cup of organic red quinoa, which once cooked, opens up into beautiful little red & white spirals.

Native Americans referred to quinoa as the “mother of all grains” and I think it always make soups & stews look so pretty. It also contains a balanced set of essential amino acids, making it a complete protein source!

For seasoning, I used a “Muchi Curry” seasoning I found at Whole Foods Market, along with sage, oregano, pepper and a little bit of salt.

Love my vegan bean & barley veggie stew! Next time however, I need to toss everything in before 5pm. I didn’t realize a “slow cooker” really means a SLOW cooker! We didn’t eat dinner until 11:45pm last night! A little LATE, but worth the wait. Mmmm…