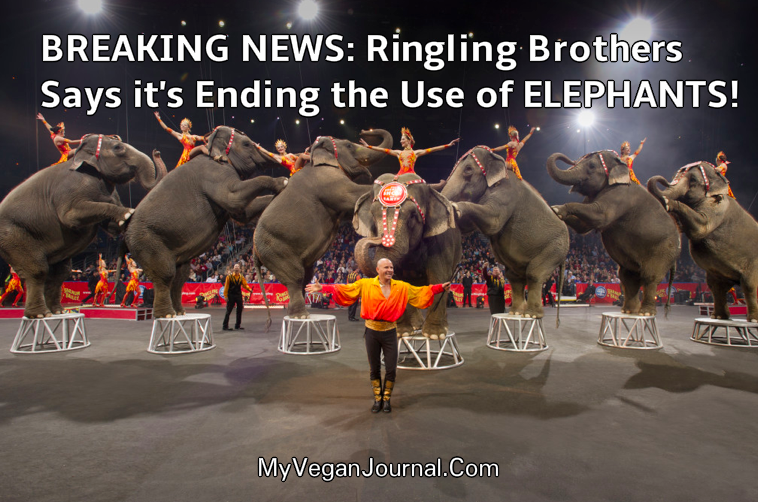 It’s not often I turn on my computer in the morning and burst into tears of happiness. But here I am, crying.   Ringling Bros. and Barnum & Bailey Circus just announced they’re ENDING the use of ALL Elephants in their circus acts! I can’t count the thousands of people like myself, who have organized or participated in demonstrations, letter writing campaigns, and social media efforts over the many years urging Feld Entertainment to do the right thing.  I’m happy to report that today they’ve decided to do so. Yep, they are going to STOP USING ELEPHANTS!!! HURRAY!!!!!

The 13 elephants that are currently part of the Ringling Bros. shows will be sent to the circus’ Center for Elephant Conservation in Florida by 2018, where they will join over 40 others. It would be nice if it they were going today, and it would be great if they were no longer using any animals, but I’m sure we can all agree this is fantastic news.  No law is forcing them to do this;  you did this.  Each and every person who stood up against the use of sharp steel bullhooks and the beatings the elephants endured just to perform “tricks” for the public.  And a special thanks to those who documented and exposed the abuse. Today’s announcement is a testament of our power to make the world a better place, and that’s worth celebrating.

The elephant acts were never joyful entertainment, but rather a sadistic horror show that the public was duped into believing was fun for all. If you got your thrills by watching the same thing done to humans, you’d likely be on meds or in therapy.

Times they are a’ changin’! Yes siree Bob!! It’s happening!! Can you feel it? Ok Seaworld, you’re next!